What the Negro Woman Asks p 1 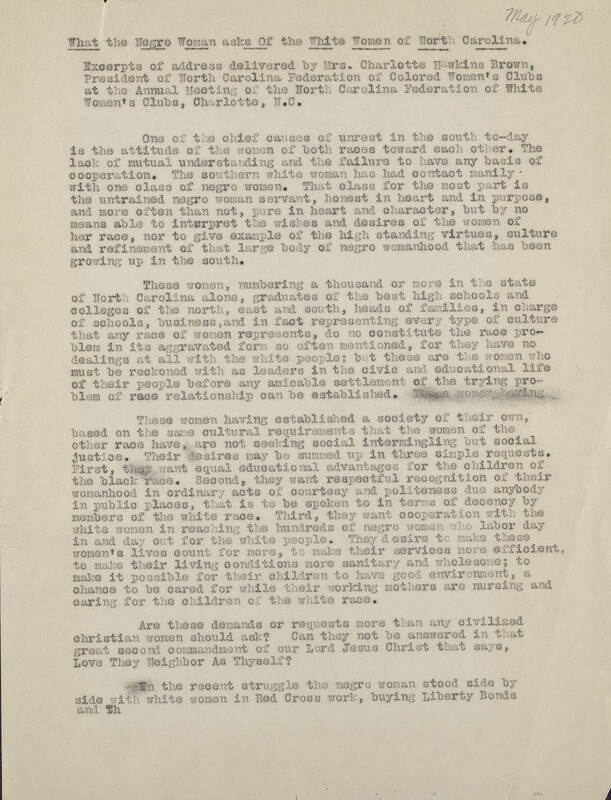 What the Negro Woman Asks p 1

What the Negro Woman asks of the White Women of North Carolina.

One of the chief causes of unrest in the south to-day is the attitude of the women of both races toward each other. The lack of mutual understanding and the failure to have any basis of cooperation. The southern white women has had contact manily with one class of negro women. That class for the most part is the untrained negro woman servant, honest in heart and in purpose, and more often than not, pure in heart and character, but by no means able to interpret the wishes and desires of the women of her race, nor to give example of the high standing virtues, culture and refinement of that large body of negro womanhood that had been growing up in the south.

These women, numbering a thousand or more in the state of North Carolina alone, graduates of the best high schools and colleges of the north, east, and south, heads of families, in charge of schools, business and in fact representing every type of culture that any race of women represents, do no constitute the race problem in its aggravated form so often mentioned, for they have no dealings at all with the white people; but these are the women who must be reckoned with as leaders in the civic and educational life of their people before any amicable settlement of the trying problem of race relationship can be established.

These women having established a society of their own, based on the same cultural requirements that the women of the other race have, are not seeking social intermingling by social justice. Their desires may be summed up in three simple requests. First, they want equal educational advantages for the children of the black race. Second, they want respectful recognition of their womanhood in ordinary acts of courtesy and politeness due anybody in public places, that is to be spoken to in terms of decency by members of the white race. Third, they want cooperation with the white women in reaching the hundreds of negro women who labor day in and day out for the white people. They desire to make these women’s lives count for more, to make their services more efficient, to make their living conditions more sanitary and wholesome; to make it possible for their children to have good environment, a chance to be cared for while their working mothers are nursing and caring for the children of the white race.

Are these demands or requests more than any civilized christian women should ask? Can they not be answered in that great second commandment of our Lord Jesus Christ that says, Love Thy Neighbor As Thyself?

In the recent struggle the negro woman stood side by side with white women in Red Cross work, buying Liberty Bonds and Thrift Stamps. She tore from her bosom the loved ones of her race and laid them on the altar to make the supreme sacrifice. No one was more courageous for she did this in the face of injustice, discrimination and segregation of all kinds. She asks in return for a chance to live her life free from public scorn and contempt; recognition for the high ideals of character enfolded in her breast; a chance to help make her beautiful southland a veritable Garden of Eden.