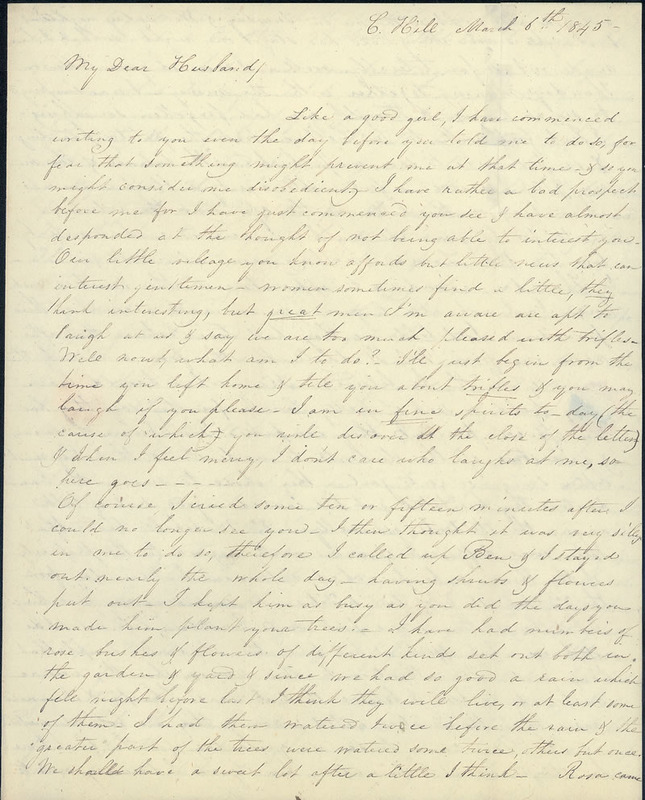 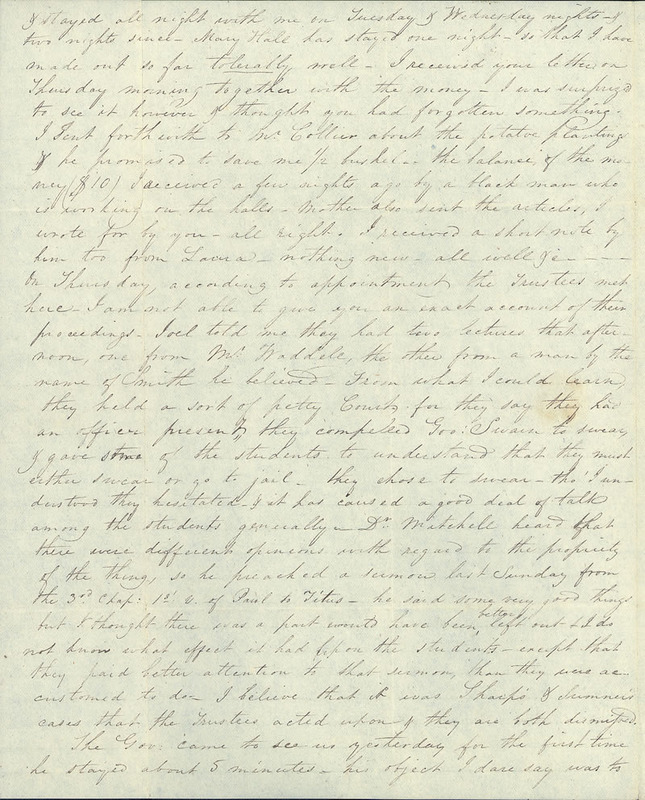 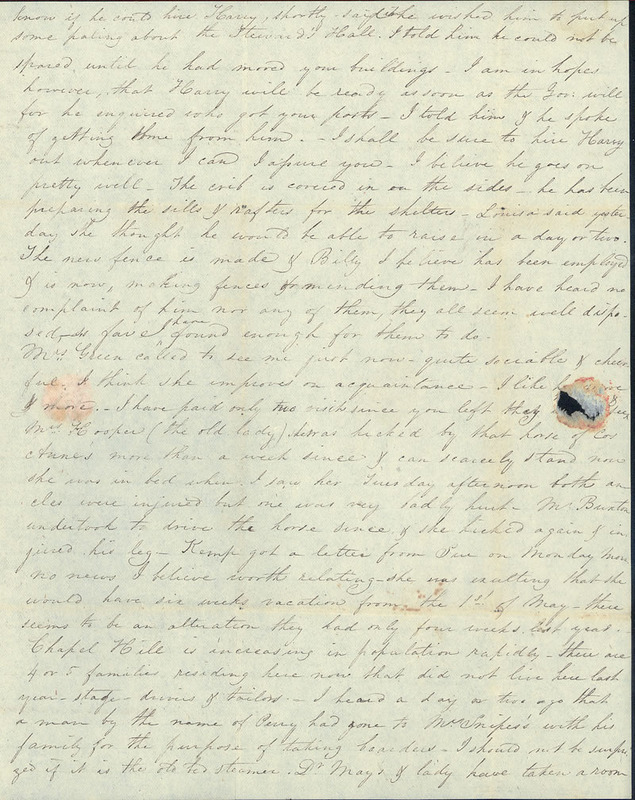 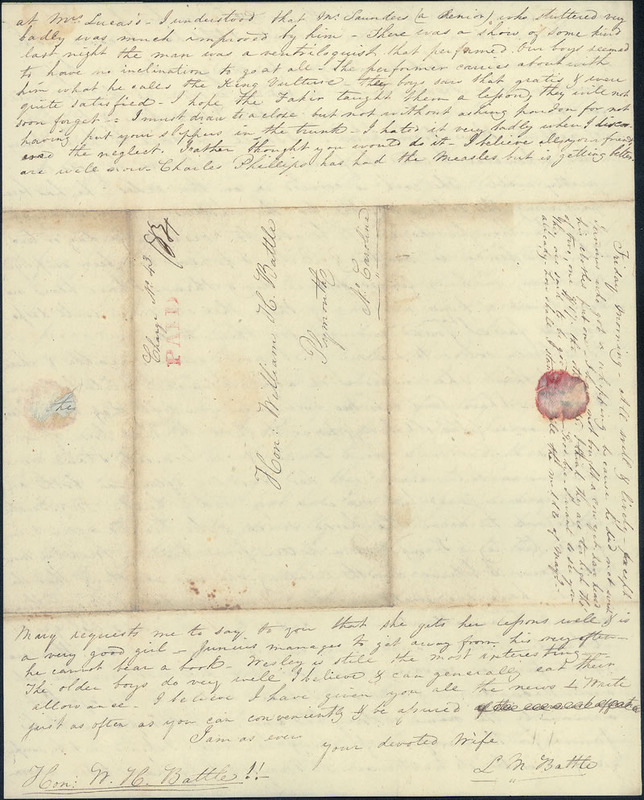 Like a good girl, I have commenced writing to you even the day before you told me to do so, for fear that something might prevent me at that time - if so you might consider me disobedient. I have rather a bad prospect before me for I have just commenced you see I have almost desponded at the thought of not being able to interest you. Our little village you know affords but little news that can interest gentlemen - women sometimes find a little, they think interesting, but great men I'm aware are apt to laugh at me & say we are too much pleased with trifles. Well now, what am I to do? I'll just begin from the time you left home & tell you about trifles & you may laugh if you please. I am in fine spirits to-day (the cause of which you will discover at the end of this letter) & when I feel merry, I don't care who laughs at me, so here goes ---

Of course I cried some ten or fifteen minutes after I could no longer see you - I then thought it was very silly in me to do so, therefore I called up Ben & I stayed out nearly the whole day - having shrubs & flowers put out. I kept him as busy as you did the days you made him plant your trees. I have had numbers of rose bushes & flowers of different kinds set out both in the garden & yard & since we had so good a rain which fell night before last I think they will live, or at least some of them. I had them watered twice before the rain & the greater part of the trees were watered some twice, others but once. We should have a sweet lot after a little I think. Rosa came

& stayed all night with me on Tuesday & Wednesday nights - & two nights since - Mary Hall has stayed one night - so that I have made out so far tolerably well. I received your letter on Thursday morning together with the money. I was surprised to see it however & thought you had forgotten something. I sent forthwith to Mr. Collier about the potatoe planting & he promised to save me ½ bushel as the balance of the money ($10) I received a few nights ago from a black man who is working on the halls. Mother also sent the articles, I wrote for by you - all eight. I received a short note from him too from Laura - nothing new - all well & ---

On Thursday, according to appointment the Trustees met here. I am not able to give you an exact account of their proceedings. Joel told me they had two lectures that afternoon, one from Mr. Waddell, the other from a man by the name of Smith he believed. From what I could learn, they held a sort of petty Court for they say they had an officer present; they compelled Gov. Swain to swear, & gave some of the students to understand that they must swear or go to jail. They chose to swear, tho' I understand they hesitated & it has caused a good bit of talk among the students generally. Dr. Mitchell heard that there were different opinions with regard to the propriety of the thing, so he preached a sermon last Sunday from the 3rd chap. 1st v. of Paul to Titus - he said some very good things but I thought there was a part would have been better left out & I do not know what effect it had upon the students except that they paid better attention to that sermon, than they were accustomed to do. I believe that it was Tharp's & Sumner's cases that the Trustees acted upon & they are both dismissed.

The Gov. came to see us yesterday for the first time, he stayed about 5 minutes - his object I dare say was to

know if he could hire Harry, shortly said he wished him to put up some paling about the Steward's Hall. I told him he could not be spared, until he had moved your buildings. I am in hopes however, that Harry will be ready as soon as the Gov. will for he inquired who got your posts. I told him & he spoke of getting some from him. I shall be sure to hire Harry out whenever I can I assure you. I believe he goes on pretty well. The crib is covered in on the sides - he has been preparing the sills & rafters for the shelters. Louisa said yesterday she thought he would be able to raise in a day or two. The new fence is made & Billy I believe has been employed & is now, making fences and/or mending them. I have heard no complaint of him nor any of them, they all seem well disposed, so far I have found enough for them to do.

Mrs. Green called to see me just now, quite sociable and cheerful. I think she improves on acquaintance. I like her more & more. I have paid only two visits since you left they [portion missing] Mrs. Hooper (the old lady) She was kicked by that horse of Cosctune's[?] more than a week since & can scarcely stand now she was in bed when I saw her Tuesday afternoon both ancles[sic] were injured but one was very badly hurt. Mr. Burton undertook to drive the horse since & she kicked again & injured his leg. Kemp got a letter from Sue on Monday morn no news I believe worth relating - she was exulting that she would have six weeks vacation from the 1st of May - there seems to be an alteration they had only four weeks last year.

Chapel Hill is increasing in population rapidly - there are 4 or 5 families residing here now that did not live here last year - stage-drivers & tailors. I heard a day or two ago that a man by the name of Perry has gone to Mrs. Snipes's with his family for the purpose of taking boarders. I should not be surprised if it is the old bed steamer. Dr. Mays & lady have taken a room

at Mrs. Lucas's. I understand that Mr. Saunders (a Senior) who stuttered very badly was much improved by him. There was a show of some kind last night the man was a ventriloquist that performed. Our boys seemed to have no inclination to go at all. The performer carries about with him what he calls the King Vulture - the boys saw that gratis & were quite satisfied. I hope the Fakir taught them a lesson, they will not soon forget. I must draw to a close but not without asking pardon for not having put your slippers in the trunk. I hated it very badly when I discovered the neglect. I rather thought you would do it. I believe all your friends are well now. Charles Phillips has had the measles but is getting better.

Friday morning - All well & lively - except Junius who got a whipping because he did not wish his clothes put on. I have not bought a cow yet - have heard of two, one $17 the other $15. I think they are too high tho they are said to be good - Good-bye. I want to see you already - how shall I stan[d] [illegible]ill the middle of May? Mary request me to say to you that she gets her lessons well & is a very good girl. Junius manages to get away from his very often - he cannot bear a book. Wesley is still the most interesting. The older boys do very well I believe & can generally eat their allowance. I believe I have given you all the news. Write just as often as you can conveniently & be assured I am as ever