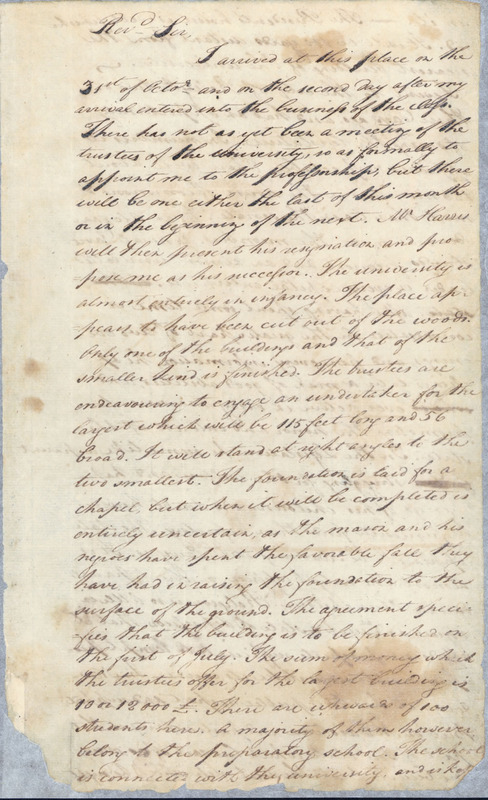 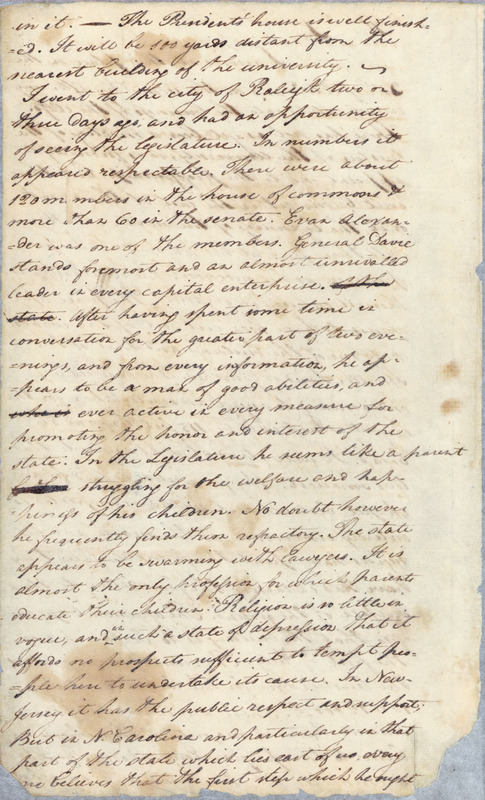 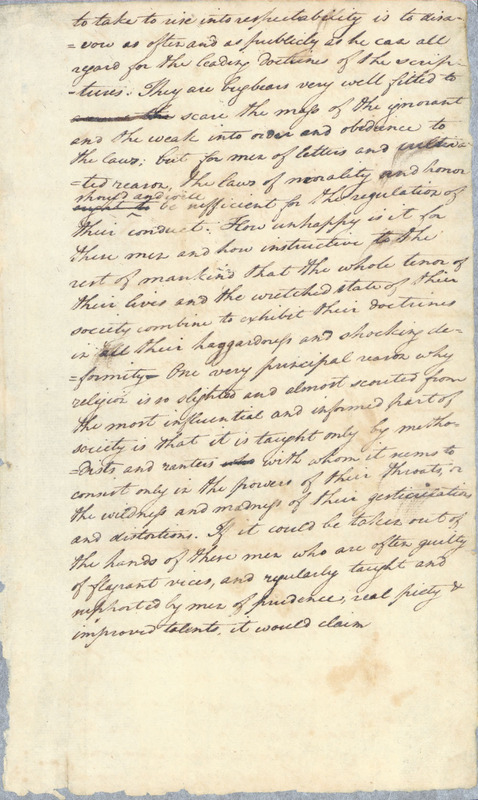 I arrived at this place on the 31st of Octor and on the second day after my arrival entered into the business of the class. There has not as yet been a meeting of the trustees of the university, so as formally to appoint me to the professorship, but there will be one either the last of this month or in the beginning of the next. Mr. Harris will then present his resignation and propose me as his successor. The university is almost entirely in infancy. The place appears to have been cut out of the woods. Only one of the buildings and that of the smaller kind is finished. The trustees are endeavouring to engage an undertaker for the largest which will be 115 feet long and 56 broad. It will stand at right angles to the two smallest. The foundation is laid for a chapel, but when it will be completed is entirely uncertain, as the mason and his negroes have spent the favorable fall they have had in raising the foundation to the surface of the ground. The agreement specifies that the building is to be finished on the first of July. The sum of money which the trustees offer for the largest building is 10 or 12000 £. There are upwards of 100 students here. A majority of them however belong to the preparatory school. The school is connected with the university, and is kep[t]

in it. - The President's house is well finished. It will be 100 yards distant from the nearest building of the university. -

I went to the city of Raleigh two or three days ago, and had an opportunity of seeing the legislature. In numbers it appeared respectable. There were about 120 members in the house of commons & more than 60 in the senate. Evan Alexander was one of the members. General Davie stands foremost and an almost unrivalled leader in every capital enterprise. After having spent some time in conversation for the greater part of two evenings, and from every information, he appears to be a man of good abilities, and ever active in every measure for promoting the honor and interest of the state. In the Legislature he seems like a parent struggling for the welfare and happiness of his children. No doubt however he frequently finds them refractory. The state appears to be swarming with lawyers. It is almost the only profession for which parents educate their children. Religion is no little in vogue, and in such a state of depression that it affords no prospects sufficient to tempt people here to undertake its cause. In New Jersey it has the public respect and support; But in N. Carolina and particularly in that part of the state which lies east of us, every one believes that the first step which he might

to take to rise into respectability is to disavow as often and as publicly as he can all regard for the leading doctrines of the scriptures. They are bugbears very well fitted to scare the mass of the ignorant and the weak into order and obedience to the laws; but for men of letters and cultivated reason, the laws of morality and honor should and will be sufficient for the regulation of their conduct. How unhappy is it for these men and how instructive to the rest of mankind that the whole tenor of their lives and the wretched state of their society combine to exhibit their doctrines in all their haggardness and shocking deformity - One very principal reason why religion is so slighted and almost scoured from the most influential and informed part of society is that it is taught only by methodists and ranters with whom it seems to consist only in the powers of their throats, or the wildness and madness of their gesticulations and distortions. If it could be taken out of the hands of these men who are often guilty of flagrant vices, and regularly taught and supported by men of prudence, real piety & improved talents, it would claim [letter unfinished]