“Those Who Own the Property Should Rule.” 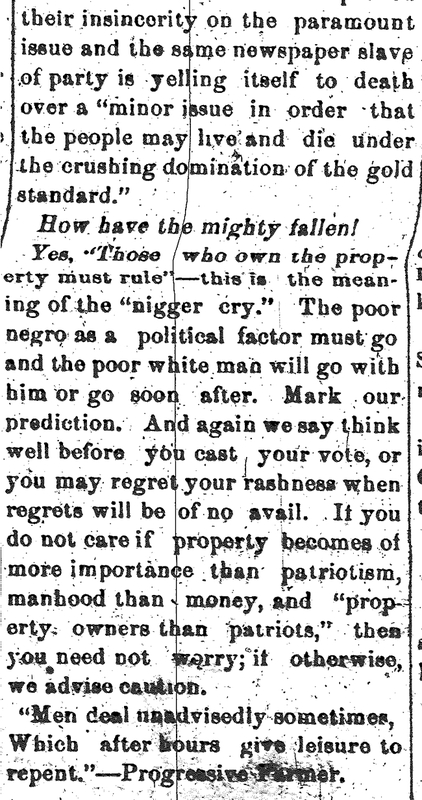 “Those Who Own the Property Should Rule.”

"Those Who Own the Property Should Rule."

This was the startling title of a leading editorial in the Raleigh Post, one of the leading dailies, if not the leading one - of the Democratic party in this State, on Oct. 22. This is stratling because it is a confession. To use a homely phrase, it "lets the cat out of the bag." This is a temporary raising of the sheep's clothing and gives us a temporary view of the hyprocratical wolf within.

"Those who own the property should rule." This is the law of the new Aristocratic party in this State, misnamed, the Democratic. Yes, it has come to this: the dollar is greater than the man, and money better than manhood. This is monopoly's view and this is the view taken by the so called Democratic leaders of this State.

Money must rule. Intelligence, patriotism, virtue, religion - these are nothing. Corporations, trusts, combines - these be your gods, ob Isreal. The poor struggling farmer raising his five cent cotton and striving in his humble way to serve as best he can his country and his God does not own the property and he must not rule - he must serve.

"Those who own the property must rule." The wishes of the Southern Railway, the of the American Tobacco Company, of the Sugar Trust must be respected - when the great railway corporation says "I want more money; raise passenger rates so I can squeeze more out of the people" - passenger rates must be raised - the railroad corporation "owns property" and "those who own the property must rule."

When the various trusts say to a Democratic legislature: "Pass this bill," or "kill this bill," their orders must be obeyed because they own property and

We do not believe there is a Democratic negro yelling orator in the State more opposed to negro domination than we, - not one who is a more earnest advocate of white supremacy than we. But we have read both sides, we have looked up their record, and are convinced that it is a hypocritical cry hatched up for the purpose of deceiving the voters, in order to elect a legislature which will be the tool of plutocracy - of the moneyed men, and that will give us an election law, whose meaning shall be "those who own property must rule."

This is what we are fighting: we are honest in this fight, and we are earnest in it. We beg every voter to consider carefully the great question before him.

How have the mighty fallen!

Yes, "Those who own the property must rule"- that is the meaning of the "nigger cry." The poor negro as a political factor must go and the poor white man will go with him or go soon after. Mark our prediction. And again we say think well before you cast your vote, or you may regret your rashness when regrets will be of no avail. If you do not care if property becomes of more importance than patriotism, manhood than money, and "property owners than patriots," then you need not worry; if otherwise, we advise caution.

"Men deal unadvisedly sometimes, Which after hours give leisure to repent." - Progressive Farmer.