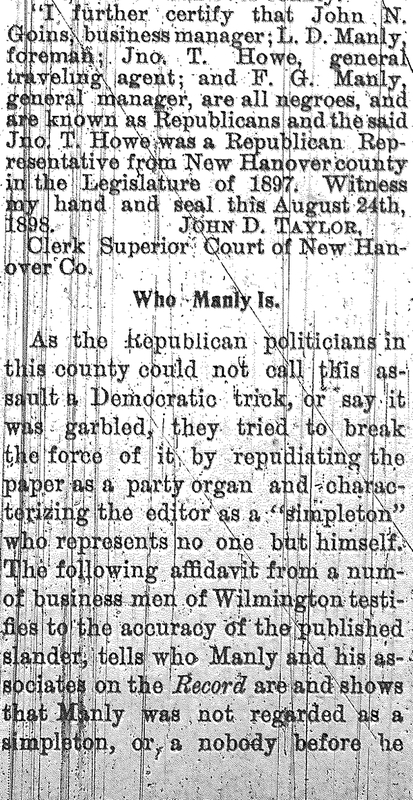 The Most Infamous That Ever

Appeared in Print in

The Alarmed Politicians are Trying to

Break the Force of it by Resort-

ing to Various Dodges, But

They are Too Thin.

The infamous assault on the white women of this State which appeared on the 18th of August in the Daily Record, the negro paper published in this city, has aroused a storm of indignation from one end of the State to the other. We have received so many requests for copies of the Star containing this article that we herewith reproduce it in full, the accuracy of which is certified to by Col. John D. Taylor, Clerk of the Superior Court of New Hanover county, and by a number of our well-known business men. The article is headed:

"A Mrs. Felton, from Georgia, makes a speech before the Agricultural Society at Tybee, Ga., in which she advocates lynching as an extreme measure. This woman makes a strong plea for womanhood, and if the alleged crimes of rape were half so frequent as is oft times reported, her plea would be worthy of consideration.

"Mrs. Felton, like so many other so-called Christians, loses sight of the basic principle of the religion of Christ in her plea for one class of people as against another. If a missionary spirit is essential for the uplifting of the poor white girls, why is it? The morals of the poor white people are on a par with their colored neighbors of like conditions, and if any one doubts the statement let him visit among them. The whole lump needs to be leavened by those who profess so much religion and showing them that the preservation of virtue is an essential for the life of any people.

"Mrs. Felton begins well for she admits that education will better protect the girls on the farm from the assaulter. This we admit and it should not be confined to the white any more than to the colored girls. The papers are filled often with reports of rapes of white women, and the subsequent lynching of the alleged rapists. The editor pur forth volleys of aspersions against all negroes because of the few who may be guilty. If the papers and speakers of the other race would condemn the commission of crime because it is crime and not try to make it appear that the negroes were the only criminals, they would find their strongest allies in the ingelligent negroes themselves, and together the whites and blacks would root the evil out of both races.

"We suggest that the whites guard their women more closely, as Mrs. Felton says, thus giving no opportunity for the human fiend, be he white or black. You leave your goods out of doors and then complain because they are taken away . Poor white men are careless in the matter of protecting their women, especially on farms. They are careless of their conduct toward them and our experience among poor white people in the country teaches us that the women of that race are not any more particular in the matter of clandestine meetings with colored men, than are the white men with colored women. Meetings of this kind go on for some time until the woman's infatuation or the man's boldness, bring attention to them and the man is lynched for rape. Every negro lynched is called a 'big, burly, black brute,' when in fact many of those who have thus been dealt with had white men for their fathers, and were not only not 'black' and 'burly' but were sufficiently attractive for white girls of culture and refinement to fall in love with them as is well known to all."

"Mrs. Felton must begin at the fountain head if she wishes to purify the stream.

You set yourselves down as a lot of carping hypocrites; in fact you cry aloud for the virtue of your women while you seek to destroy the morality of ours. Don't think ever that your women will remain pure while you are debauching ours. You sow the seed -- the harvest will come in due time "

THE AFFIDAVIT OF THE CLERK

An effort has been made by some of the politicians to fool the people by representing that this slander was a Democratic trick or was garbled, but the following affidavit from the Clerk of the Superior Court settles the question as to its accuracy.

I, John D. Taylor, Clerk of the Superior Court of New Hanover county, do hereby certify that the foregoing is an accurate and true copy of an editorial in the Daily Record , a paper published in the city of Wilmington, of date Aug. 18, 1898.

"I further certify that John N. Goins, business manager; L. D. Manly, foreman; Jno. T. Howe, general traveling agent; and F. G. Manly, general manager, are all negroes, and are known as Republicans and the said Jno. T. Howe was a Republican Representative from New Hanover county in the Legislature of 1897. Witness my hand and seal this August 24th, 1898. JOHN D. TAYLOR,

As the Republican politicians in this county could not call this assault a Democratic trick, or say it was garbled, they tried to break the force of it by repudiating the paper as a party organ and characterizing the editor as a "simpleton" who represents no one but himself. The following affidavit from a number of business men of Wilmington testifies to the accuracy of the published slander, tells who Manly and his associates on the Record are and shows that Manly was not regarded as a simpleton, or a nobody before he startled the bosses by the publication of that awful article:

B.G. Worth, of the Worth Co.; R. W. Hicks, wholesale grocer; C. E. Borden, president of Navassa Guano Co.; W. L. DeRosset, commander of N. C. Division Confederate Veterans, and John C. Springer, of the firm of W. E. Springer & Co., each being duly sworn says that he has read the foregoing paper, and that the said is an accurate and true copy of an editorial in the Daily Record of the date August 18th, 1898; that said paper, the Daily Record , has been published in the city of Wilmington at least eight months prior to this date, and Alex. L. Manly, the editor thereof, is a negro, is well known as a Republican and has held the position of Deputy Register of Deeds in New Hanover county under the Republicans.

Personally appeared before me, Wm. L. DeRossett, B. G. Worth, John C. Springer, R. W. Hicks and Charles E. Borden, shown to me to be the persons they represent themselves to be, and made oaths that the above statement is correct to the best of their knowledge and belief.