The Red Terror was the official Bolshevik policy of extreme violence aimed at crushing all political opposition during the Civil War. It gave unprecedented powers to the Cheka (the Extraordinary Commission or Bolshevik secret police) to arrest, torture and execute without trial. In addition to the Bolsheviks' opponents, the policy targeted entire social classes, including the nobility, the clergy, landowners, intellectuals and Cossacks. The successor organizations to the Cheka established the Gulag forced labor camp system, implemented Stalin's purges, and continue to control many aspects of Russian life to this day. 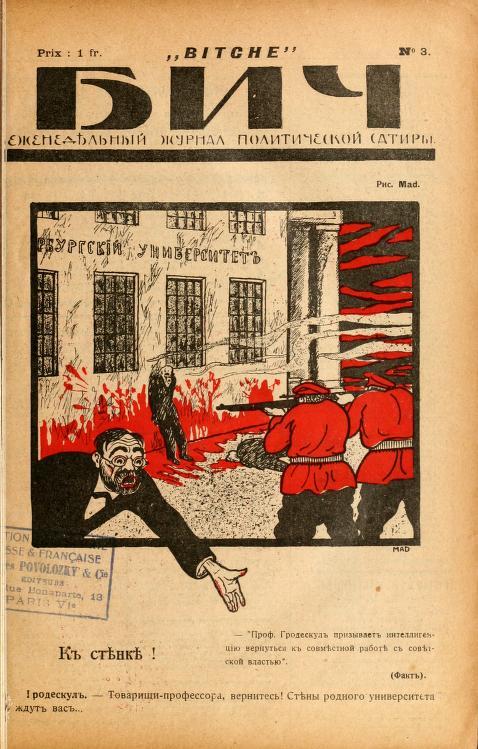 One of the earliest émigré satirical journals here simultaneously lampoons Bolshevik destruction of the intelligentsia, their attempts to attract remaining intellectuals to their side, and those who collaborate with the Soviet regime. The cover by founder and main cartoonist Mikhail Drizo (alias "Mad.") depicts Professor Grodeskul (real-life member of the Saint Petersburg University faculty) urging: "Comrade-professors, come back! The walls of your dear university await you . . ." as faculty are executed against the university's façade by Red guardsmen.