Treating the Sick in North Carolina

Globally and for millenia, belief systems have remained inextricably tied to diagnosing and treating illnesses. The American natives met by the first English colonists in this region did not generally regard physical or mental problems as distinct from spiritual ones. The figure depicted here, identified as a "conjuror" by English explorer and scientist Thomas Harriot, was a shaman who lived in one of the villages around Roanoke Island (in present-day Dare County, N.C.). As reported by Harriot, who clearly did not grasp the full complexity of the Roanoke natives' beliefs, this conjuror healed the sick by using "strange gestures" and "enchantments" to ward off evil spirits. Note the small stuffed bird the shaman is wearing. According to Harriot, it was "a badge of [his] office."

"[The American Natives] use a kind of earth...very like Terra sigillata...for the cure of sores and wounds."

---Thomas Harriot, English explorer and scientist, commenting on the Roanoke natives' effective use of fine clays for salves, 1588. 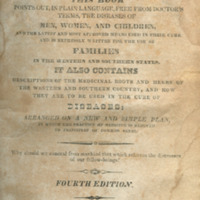 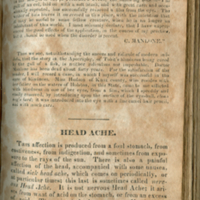 It Killeth the Worms of the Belly

The University Library preserves many imprint and manuscript collections relating to this region's natural resources. In North Carolina as elsewhere in the world, herbs have long served as essential ingredients for medications. This handy reference profiles many of the plants that provided our ancestors with home-grown remedies for a variety of complaints, such as sage for sunburn, radishes for removing warts, thyme for "nervous disorders," horehound for snake bites and rue that "killeth the Worms of the Belly" (intestinal parasites). 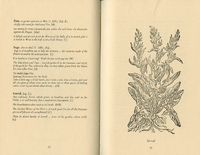 The histories of patent medicines and modern over-the-counter drugs have had dramatic effects on mass-marketing and the promotion of public health. As illustrated later in the exhibition, many popular non-prescription pain relievers and other "quick relief" products originated in North Carolina. Even Pepsi-Cola and some other beverages were initially marketed for their therapeutic effectiveness in soothing dyspepsia (indigestion) and treating chronic fatigue.

The role of sanitation in preventing the onset and spread of disease was not widely understood or publicly addressed until the latter portion of the nineteenth century. Pollution of  drinking water by both human and animal waste was a common cause  of dysentery, typhoid, and other deadly illnesses. This book traces  the history and construction of outhouses or "privies" near the White Oak River in eastern North Carolina and documents various styles of privies. 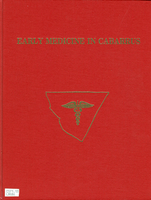 The North Carolina Collection preserves references on all the state's 100 counties. Many of those references contain data on the history of public health care in various locations, such as this volume, which preserves information compiled by Eugenia W. Lore about the medical hsitory of Cabarrus County.