For more than 3,000 years, smallpox killed or badly disfigured many millons of people. On average, the disease killed up to thirty percent of those infected, and the majority of survivors carried deep scars (pockmarks), oftentimes concentrated on their faces.

It was not until 1796 that an English doctor, Edward Jenner, developed a vaccine from non-lethal cowpox to protect people from the disease. Unfortunately, it would take more than a century for Jenner's vaccine to be distributed widely. In North Carolina, as in other locations, it proved difficult for medical authorities to convince citizens to submit to being deliberately infected with a "pox," even one that offered protection from Variola major.

During the late colonial period and until Raleigh's founding in 1792, New Bern served as North Carolina's principal seat of government. That town, too, was where the public printer, James Davis, produced North Carolina's paper money. In 1779, when smallpox hit New Bern, state official immediately ceased the printing of currency there, fearing that hand-to-hand exchanges of infected bills could spread the disease. Hugh Walker, a printer in Wilmington, was then hired by the state to create the 1779 issue. This specimen of Walker's work is from the University Library's 10,000-piece numismatic collection. 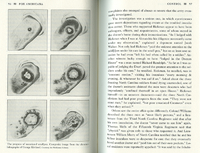 In this book, North Carolina historian Elizabeth Fenn focuses on the swath of misery that smallpox cut through American military and civilian populations during the Revolution. She documents how smallpox killed more than 100,000 people on the continent between 1775 and 1782. She also summarizes the disease's earlier tolls, how it had struck down and disfigured an even greater number of people in the colonial period.

This illustration from Pox Americana depicts a localized outbreak on a patient's upper arm after a smallpox inoculation. In cases when patients contracted the most virulent strain of the virus "naturally," the infected were often covered with thousands of these oozing skin eruptions from head to toe. If the eruptions or pustules merged into larger lesions, rampant bacterial infections and death were near certainties.

"Our ignorant and malicious neighbors threatened to destroy the town if we inoculated, so the small-pox stayed among us until October . . . This condition practically cut off all intercourse with Salem, and if people came or passed through they were afraid. It was customary for such people to have a leaf of tobacco which they smelled as a preventative, some stuck tobacco leaves in their nostrils, one even saw some passerby who had smeared tar on the forehead, under the nose, and elsewhere." 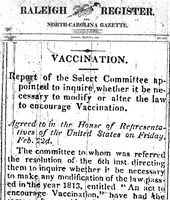 During the 1820s, North Carolina became a focal point of controversy relating to the inoculation and vaccination of citizens for smallpox. In 1813 Congress passed an act to encourage vaccination and appointed a federal agent, Dr. James Smith of Baltimore, Maryland, to distribute smallpox vaccine throughout the country. This act created one of the first public health programs in the United States. The wisdom of Dr. Smith's method, however, came into question when in November of 1821 he inadvertently mailed an envelope of live smallpox scabs instead of vaccine to Dr. John Ward in Tarboro, N. C. The contents of the envelope began an epidemic. Before it ended, come sixty people around Tarboro were sick, with ten more dead. As a result of this accident, Congress passed a law repealing the 1813 Vaccination Act, and thereby abdicated its role in combating smallpox. Another eighty years passed before Congress again addressed this serious issue. 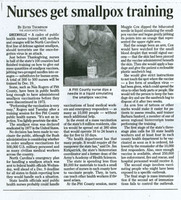 The scourge of smallpox as a naturally occurring contagion appears today to be a bygone health concern. There has been no documented case of it in the United States since 1949; and in 1979 the World Health Organization declared the disease officially eradicated. This pronouncement came two years after the last reported case of smallpox was treated successfully in west Africa. Notwithstanding such documentation, fear of the disease persists. Samples of the virus may remain buried or hidden within the stockpiles of national arsenals and preserved in undisclosed medical research laboratories. One rising, global concern is that terrorist groups could one day cultivate smallpox and unleash it as a biological weapon against concentrated, highly susceptible civilian targets.