For most of North Carolina's history, the lack of proper sanitation bred deadly bacteria and fed swarms of disease-carrying insects that killed many citizens. Outhouses, roaming livestock, open garbage heaps, large tracts of uncut weeds, and poor drainage were commonplace in urban and rural areas. Until the 1900s, the general public and most doctors did not comprehend bacterial and viral causes for disease. They did, however, connect and attribute many illnesses to what they called miasma—to bad air or "poisonous vapors."

Constructed in the 1770s with hollowed-out logs for piping, the first public water system developed in this region was in Salem, N.C. Most North Carolinians, however, until the early 1900s had to rely on cisterns and wells on their own properties for drinking water. The photographs depict the following:

POVERTY & SELF-SUFFICIENCY: woman identified as "Aunt Lucy" stands in the doorway of her home near Dobson in Surry County, N.C., October 1907.

THE OLD "OLD WELL": image, ca. 1890, showing the gazebo-like structure that once surrounded the Old Well here at the University of North Carolina at Chapel Hill. From the opening of the University in 1795 through the nineteenth century, the Old Well was the principal source of drinking water on campus. 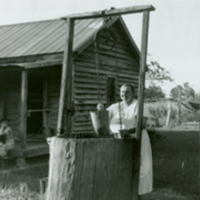 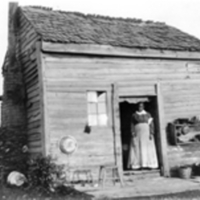 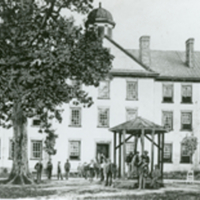 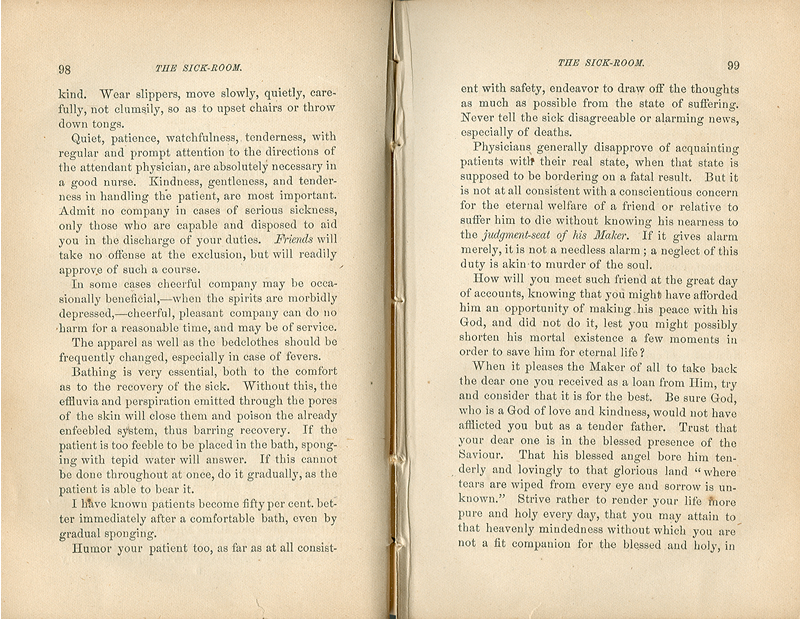 In her reference book for nineteenth-century housewives, New Bern native Mary Mason offers advice and "direction in every department of housekeeping," including how to establish and maintain properly a home's sick room. Here she stresses the importance of having "a well-ventilated" and "scrupulously clean" apartment for those who are ill. She also instructs wives to speak softly in a "musical key" and to avoid wearing "creaking shoes" when attending their patients.

It should be noted that earlier, in 1859, Mason had published A Wreath from the Woods of Carolina, which is recognized as the first North Carolina book written specifically for children.

Well into the twentieth century, dirt roads, poor drainage, and sewage systems continued to pose serious health problems, especially in municipal areas. Huge puddles and the diseases and insects they harbored often caused "the worst complaints of warm seasons" and were sources as well for "autumnal agues" [severe fevers] and other illnesses.

This 1909 view of Franklin Street, Chapel Hill's main street, testifies to the ongoing severity of these drainage problems. The boy in his box "boat" is Walter Boger (1900-1965), whose father operated a popular confectionary shop in town.