The University Library preserves a vast array of medical references, far too many to profile adequately in a single exhibition. A few examples, though, were given in the exhibition of library holdings that relate to doctors and their families who risked life and limb to bring basic health care to poor, geographically isolated residents in North Carolina. Two such families were the Krons and Sloops, who often, quite literally, operated "in the field." 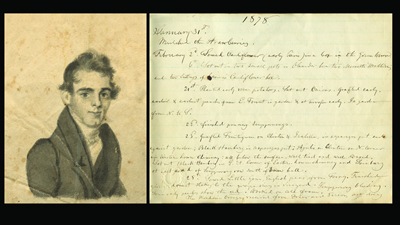 Watercolor portrait of Dr. Francis Kron, ca. 1825, and a page from his daybook, which covers 1848-1882 and chiefly concerns the doctor's horticultural activities. 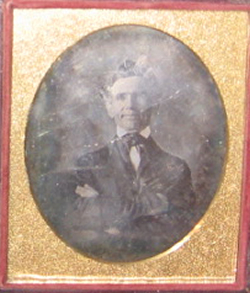 Nestled among millions of manuscripts in the Southern Historical Collection are the extraordinary papers of Dr. Francis J. Kron, a German physician who emigrated to Montgomery County, N.C. in the 1820s. Later he and his family moved west to Stanly County. There Kron's two daughters, Adele ("Addie") and Elizabeth, produced highly detailed botanical drawings as medical and horticultural references for him. His daughters also grew herbs and gathered plants for medicines that Dr. Kron dispensed as he traveled in his buggy throughout the Uwarrie Mountains and elsewhere in Stanly County. In the letter, the girls' mother reports on sicknesses in the area and how busy their father is treating patients.

Two of the sisters' drawings depict "Horse Nettle" and "Black Nightshade." Horse Nettle was once used by Native Americans and by African-American health-care providers as an antispasmodic, a sedative, and to ease menstrual problems. Black Nightshade was also used in various compounds to treat skin problems, heart disease, and other ailments. 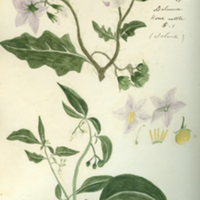 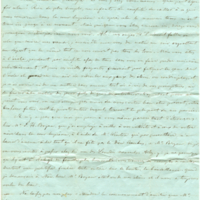 A letter [in French] from Adele and Elizabeth's mother, 1847 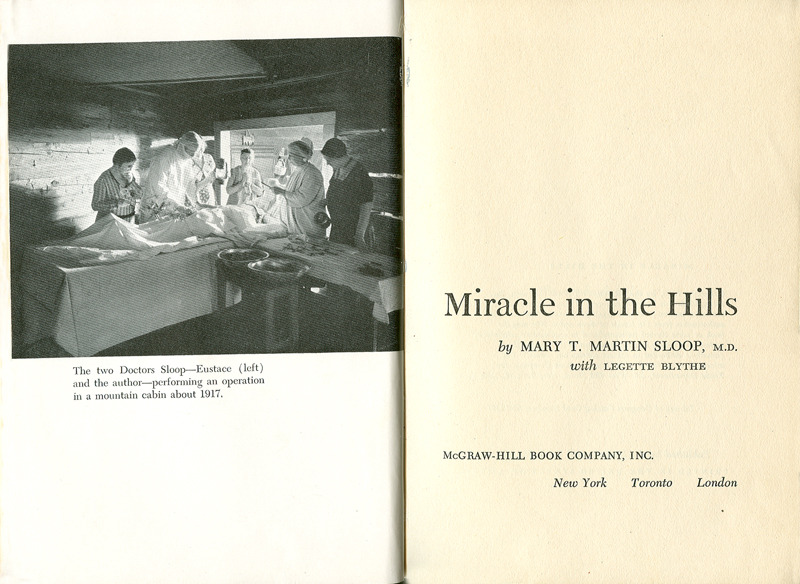 Miracle in the Hills: The Lively Personal Story of a Woman Doctor's Forty-Year Crusade in the Mountains of North Carolina by Mary T. Sloop with LeGette Blythe (New York: McGraw-Hill, 1953). CB S634s

A native of Davidson, N.C., Dr. Mary Martin Sloop devoted her entire medical career to assisting the poor in western North Carolina. She and her husband Eustace, who was also a physician, moved to Avery County in 1911. There a few years later in Crossnore they established a boarding school for mountain youth, a well as a medical and dental clinic. For decades, literally operating in open fields and inside dimly lit cabins, the couple provided medical care to thousands of families who otherwise would have no access to such care due to their grinding poverty and geographical isolation. This book by Dr. Mary Sloop recounts her experiences in carrying out this work. The photograph in this publication depicts Mary (second from right, in white operating attire) and Eustace performing surgery in a cabin in the North Carolina mountains.

SURGERY IN THE FIELD

The photograph dates from the 1920s and shows Drs. Eustace and Mary Sloop operating next to what they called their "'antiseptic'" apple tree," which grew near their Crossnore Clinic in Avery County. Due to poor lighting and questionable sanitary conditions inside existing buildings, the Sloops often preferred to perform surgery outside and beneath the tree that they regarded as "one of the safest places to operate in Crossnore."

The broadside includes photographs of the facilities, residents, and staff at Crossnore during the 1930s and 1940s. Today in addition to providing medical care and other services to its residents, Crossnore continues to offer special-education instruction to students from twenty-seven counties in North Carolina. 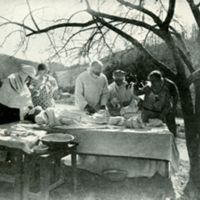 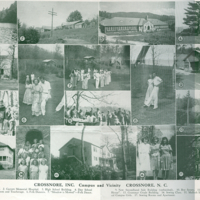