The influenza pandemic struck Chapel Hill in the fall of 1918. Overflowing with patients, the University's small infirmary simply could not cope with the hundreds of students, faculty, and town residents who contracted the deadly virus. Among those who died of the disease was Edward Kidder Graham. Following his death on October 26, 1918, Dean Marvin H. Stacy became the University acting president; but he, too, later died of influenza and pneumonia.

Before the advent of modern vaccines, the flu was generally far more deadly than it is today. In the 1840s, during a  series of epidemics, North Carolina newspapers published the following standard treatment for the disease:

Immediately after the chill take 20 to 30 grains of Hippo (a puke) with 8 to 10 grains of calomel (to clear the liver) and work off the puke with snake-root tea; when pain is violent in the breast, throat, or head apply a blister of plaster of mustard, flour, or vinegar to the painted part. 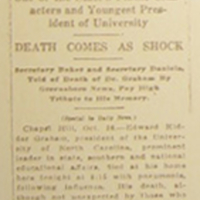 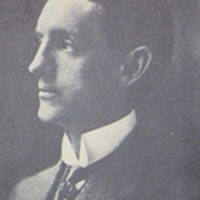 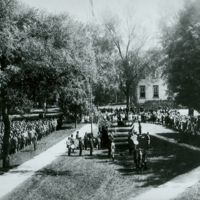 A photograph of campus between Old East and New West buildings, October 1918

SMALLPOX: "SUCH A DESTRUCTION AMONGST THEM"

Surveyor John Lawson explored much of this region during the late 1600s and early 1700s, and he observed firsthand smallpox's grim toll on native peoples. The following is an extract from his 1709 publication A New Voyage to Carolina:

. . . [smallpox] destroy'd whole Towns, without leaving one Indian alive in the village...The Small-Pox and Rum have made such a Destruction amongst them, that, on good grounds, I do believe, there is not the sixth Savage living within two hundred Miles of all our Settlements, as there were fifty Years ago.

Commenting further about the natives' vulnerability to smallpox, Lawson assigns specific blame to this "Plague," giving evidence that in his own day there was a general awareness of the disease's origins. "Most certainly," he writes, "it had never visited America, before the Discovery thereof by the Christians." 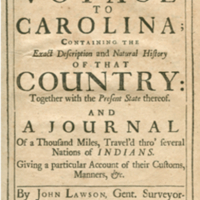 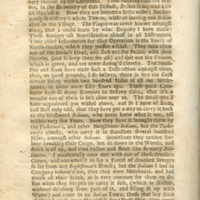 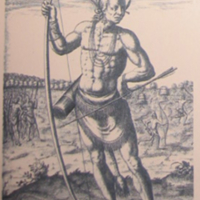 It is understandable why our ancestors often panicked when hearing reports or rumors of smallpox outbreaks. The virus passed easily through person-to-person contacts and the sharing of contaminated clothing, bedding, and utensils. Once infected, a person first experienced muscle aches and vomiting, followed by a high fever and chills. Next, red spots formed on the tongue and along the lining of the mouth, throat, and nose. A skin rash then appeared on the patient's upper chest, rapidly spreading to the face, torso, limbs, and at times leeching into the eyes. As the rash intensified, large pus-filled blisters of pustules formed. The more virulent strain of smallpox, Variola major, would riddle the body's entire surface with these hard pustules.