Bloodletting or phlebotomy is an age-old practice that was once widely employed in North Carolina. "Bad" or excess blood was medically accepted here and elsewhere as the cause of a host of illnesses. Doctors and untrained practitioners used leeches (parasitic worms) or special cutters called fleams to drain patients of blood, often in considerable quantities, to purge the body of "impurities" or to reset a patient's internal "natural balance."

BLOOD ONE OF FOUR "HUMORS"

Theories relating to bloodletting and the human body's "natural balance" can be traced back more than 2,000 years, prior to the teachings of the famous Greek physician Galan (130-201 AD), who contended that good health relied on maintaining or reestablishing proper proportions of four fluids or humors in the body: blood, phlegm, yellow bile, and black bile. 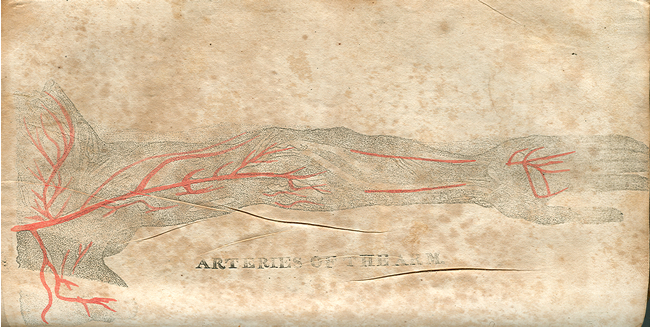 At times in North Carolina and elsewhere, excessive bloodletting killed patients or accelerated their physical decline. Accounts of George Washington's death on December 14, 1799, indicate that he died principally from "over-bleeding." In treating the 67-year old former president for a throat infection, two attending physicians bled him four times in two days, draining Washington of five pints of blood, nearly half of an adult's complete supply.

"HOW TO OPEN A VEIN"

This widely published medical reference could be found in many North Carolina homes during the 1800s. Written especially for "families in the western and southern states" and "in plain language, free from doctors' terms," Gunn's describes treatments for many diseases, including the use of bloodletting. It instructs how to bleed the sick by opening veins with lancets, employing leeches, and by cupping. In the latter process, "proof spirits" were ignited in a cup. As the alcohol burned off or "destroyed" the oxygen, a vacuum was created inside the container. The cup was then quickly placed over small cuts that had been made earlier in the patient's skin. "As the cup cools," Gunn's notes, "it will stick fast, and. . . suck the little scarifications, or gashes and fill itself with the blood in place of the air."

THE LANCET: "A RELIC OF BARBARISM"

By the latter nineteenth century, leading medical authorities were increasingly critical of doctors who bled their patients, encouraging such practitioners to abandon the lancet as a "relic of barbarism" Here, R.L. Payne of Lexington, N.C., defends the practice, citing examples of patients he had recently cured with bleeding. "Not a year has passed for the last thirty-two," asserts Dr. Payne, "in which I have not used the lancet, and . . . I cannot recall a single instance in which I have regretted doing so." 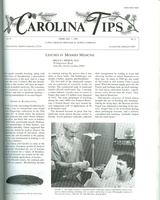 THE LEECH: STILL A "USEFUL TOOL"

The use of leeches for bloodletting is not an entirely discredited practice. According to Dr. Bruce Minkin of Asheville, N.C., it was the "Therapeutic excesses of leech mania [that] brought the use of leeching into disrepute." In this article he describes situations in modern microsurgery when leeches are applied to patients to ease and control post-surgical swelling, especially after the reattachment of severed fingers.