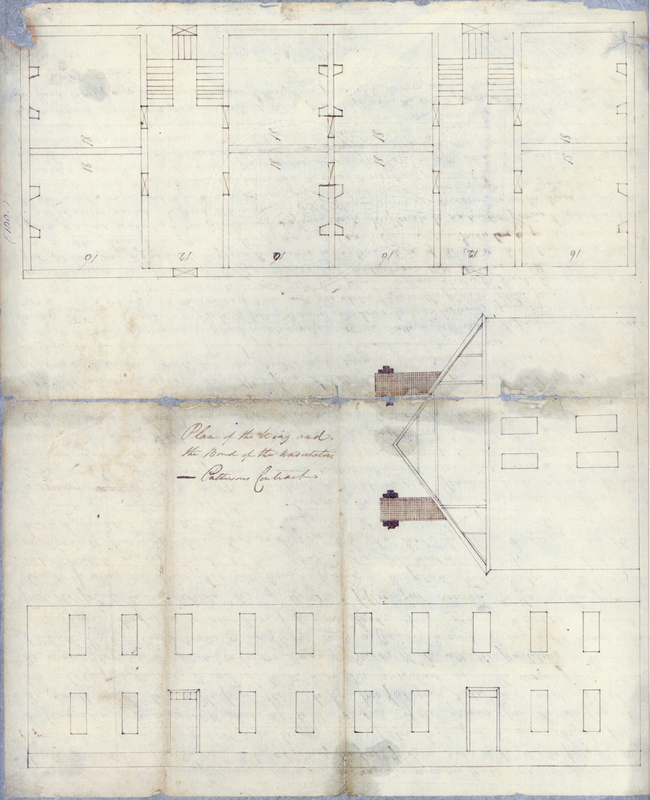 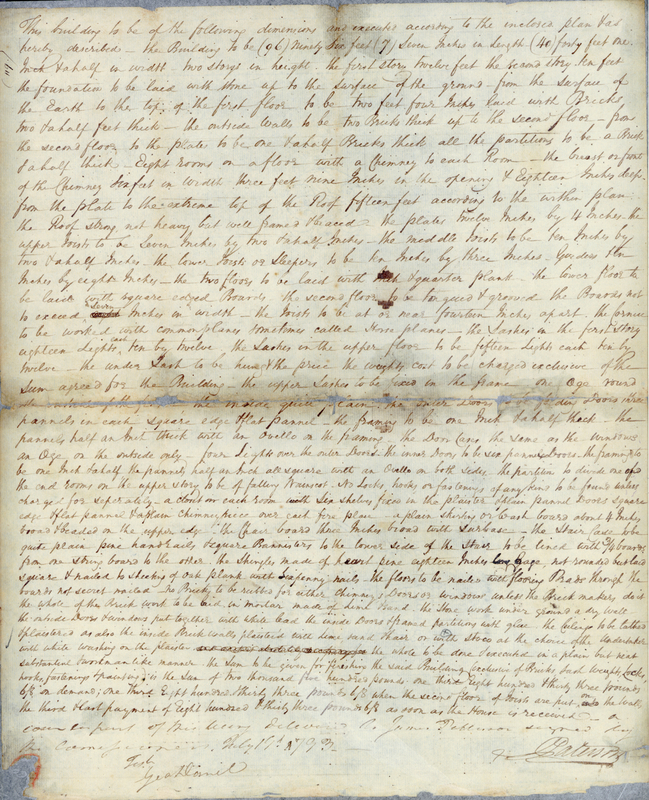 Plan of the Wing and the Bond of the undertaker.
-- Pattersons Contract

The building to be of the following dimensions and executed according to the inclosed [sic] plan & as hereby described - the Building to be (96) Ninety Six feet (7) Seven Inches in Length, (40) forty feet one Inch & a half in width, two storys [sic] in height. The first story twelve feet the second story ten feet. The foundation to be laid with stone up to the surface of the ground, from the surface of the Earth to the top of the first floor to be two feet four Inches laid with Bricks two & a half feet thick. The outside walls to be two Bricks thick up to the second floor, from the second floor to the plates to be one & a half Bricks thick, all the partitions to be a Brick & a half thick. Eight rooms on a floor with a Chimney to each Room, the breast or front of the Chimney six feet in width, three feet nine Inches in the opening & Eighteen Inches deep from the plate to the extreme top of the Roof fifteen feet according to the written plan. The Roof strong, not heavy, but well framed & braced, the plate twelve Inches by 4 Inches. The upper joists to be Seven Inches by two & a half Inches, the middle joists to be ten Inches by two & a half Inches, the lower joists or sleepers to be ten Inches by three Inches, [Joinders] ten Inches by eight Inches. The two floors to be laid with Inch & quarter plank, the lower floor to be laid with square edged Boards, the second floor to be tongued & grooved the Boards not to exceed Seven Inches in width, the joists to be at or near fourteen Inches apart. The Cornise [sic] to be worked with common planes sometimes called horse planes, the Sashes in the first story eighteen Lights each ten by twelve, the Sashes in the upper floor to be fifteen Lights each ten by twelve, the under Sash to be hung & the price the weights cost to be charged exclusive of the Sum agreed for the Building, the upper Sashes to be fixed in the frame one Oge round [page torn] the inside quill plain. The outer Doors to be folding Doors three panels in each square edge & flat panel, the framing to be one Inch & a half thick, the panels half an Inch thick with an Ovello on the framing, the Door Cases the same as the windows, on Oge on the outside only, four Lights over the outer Doors. The inner Doors to be six panel Doors, the framing to be one Inch & a half the panels half an Inch all square with an Ovello on both sides, the partition to divide one of the end rooms on the upper story to be of falling Wainscot. No locks, hooks or fasteners of any kind to be found unless charged for separately, a closet in each room with Six shelves fixed in the plaster & plain panel Doors square edge & flat panel & a plain chimney piece over each fire place, a plain skirting or wash board about 4 Inches broad & beaded on the upper edge, the Chair board three Inches broad with surbase. The Stair Case to be quite plain pine handrails & square Bannisters to the lower side of the stairs to be lined with ¾ boards from one string board to the other. The Shingles made of heart pine eighteen Inches long [illegible], not rounded but laid square & nailed to sheeting of oak plank with sixpenny nails. The floors to be nailed with flooring Brads through the boards not secret nailed. No Bricks to be rubbed for either chimneys or Doors or windows unless the Brick makers do it, the whole of the Brick work to be laid in mortar made of Lime & sand. The stone work under ground a dry wall, the outside Doors & windows put together with white lead, the inside Doors & framed partitions with glue. The Ceilings to be lathed with white washing on the plaister [sic]. The whole to be done & executed in a plain but neat, substantial & workman like manner. The Sum to be give for finishing the said Building (exclusive of Bricks, Sash Weights, Locks, hooks, fastenings, & painting) is the sum of two thousand five hundred pounds, one third eight hundred & thirty three pounds 6/8 on demand; one third eight hundred thirty three pounds 6/8 when the second floor of joists are put on the walls; the third & last payment of Eight hundred & thirty three pounds 6/8 as soon as the House is received - a counterpart of this being delivered to James Patterson signed by the Commissioner. July 19th 1793.