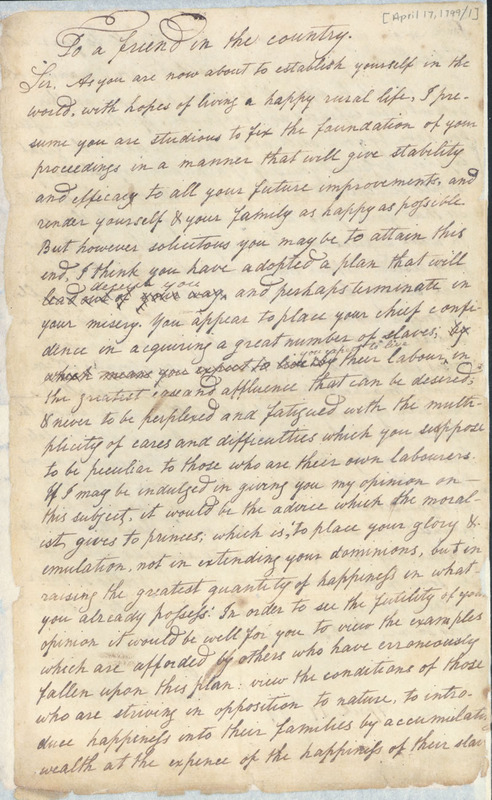 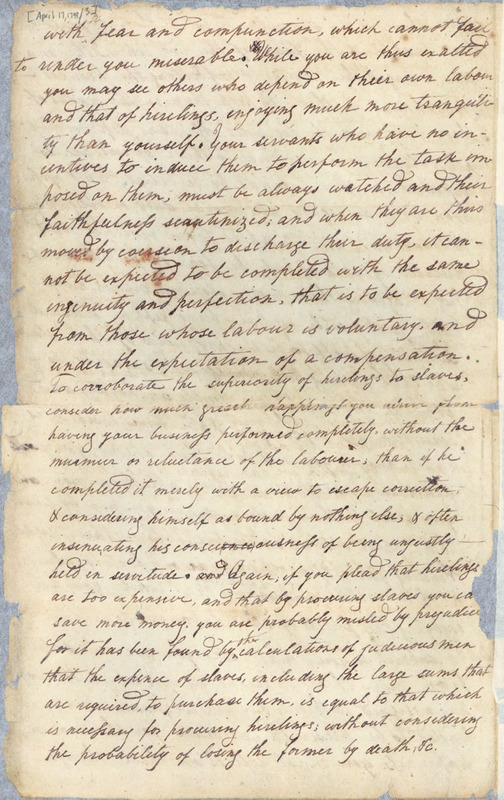 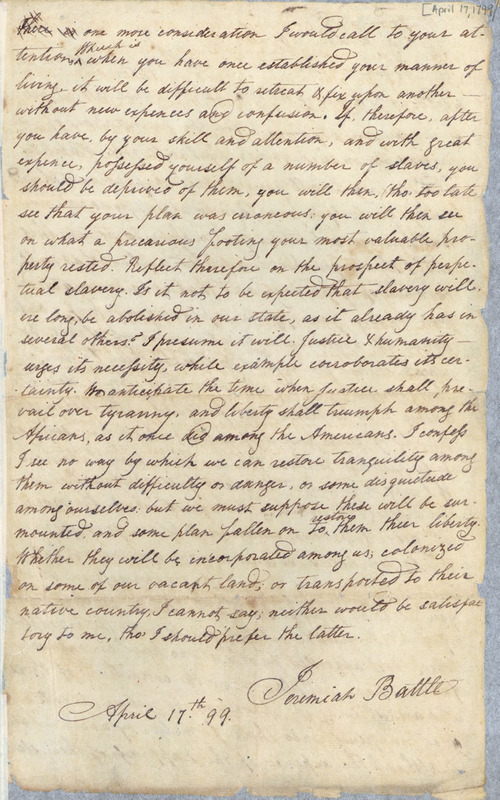 To a friend in the country.

Sir, as you are now about to establish yourself in the world, with hopes of living a happy rural life, I presume you are studious to fix the foundation of your proceedings in a manner that will give stability and efficacy to all your future improvements, and render yourself & your family as happy as possible.

But however solicitous you may be to attain this end, I think you have adopted a plan that will deceive you and perhaps terminate in your misery. You appear to place your chief confidence in acquiring a great number of slaves; you expect to live by their labour, in the greatest ease and affluence that can be desired; & never to be perplexed and fatigued with the multiplicity of cares and difficulties which you suppose to be peculiar to those who are their own labourers.

If I may be indulged in giving you my opinion on this subject, it would be the advice which the moralist gives to princes; which is, 'to place your glory & emulation, not in extending your dominions, but in raising the greatest quantity of happiness in what you already possess.' In order to see the futility of your opinion it would be well for you to view the examples which are afforded by others who have erroneously fallen upon this plan: view the conditions of those who are striving in opposition to nature, to introduce happiness into their families by accumulating wealth at the expence of the happiness of their slaves.

Where there is no stimulus to excite them to perform their task but the fear of the rod: where the master is urged to the necessity inflicting the keenest punishment on them to keep them in the paths of their duty; the degraded Africans are deprived of all voluntary benevolence to their species, are so depraved in their minds by servitude and oppression as to disregard all moral duty or obligations to mankind, and are withheld from violence and plunder by nothing but the fear of punishment. They imagine their most notorious crimes are sufficiently justifiable by their being kept in servitude.

Suppose yourself to be the proprietor of these slaves who lack nothing but courage and sagacity, to combine and resist your feeble authority and overwhelm you before you have time to resist or escape. Knowing yourself to be their enemy, you could place no confidence in their affection, nor could you appeal to their justice, since you are by justice under a prior obligation to restore to them their rights.

Finding yourself on this precarious footing, almost at their mercy, you would be conscious that while you are enjoying the fruits of their labour, and constrain[ing] them to submit to your mandate, you are withholding from them their inherent rights, which Heaven has assigned to them, & which we presume were intended to be preserved inviolate for their happiness: you must reflect on these things

with fear and compunction, which cannot fail to render you miserable. While you are thus exalted you may see others who depend on their own labour and that of hirelings, enjoying much more tranquility than yourself. Your servants who have no incentives to induce them to perform the task imposed on them, must be always watched and their faithfulness scrutinized; and when they are thus moved by coersion[sic] to discharge their duty, it cannot be expected to be completed with the same ingenuity and perfection, that is to be expected from those whose labour is voluntary, and under the expectation of a compensation.

To corroborate the superiority of hirelings to slaves, consider how much great happiness you derive from having your business performed completely, without the murmur or reluctance of the labourer; than if he completed it merely with a view to escape correction, & considering himself as bound by nothing else, & often insinuating his consciousness of being unjustly held in servitude. Again, if you plead that hirelings are too expensive, and that by procuring slaves you ca[n] save more money, you are probably misled by prejudice for it has been found by the calculations of judicious men that the expence of slaves, including the large sums that are required, to purchase them, is equal to that which is necessary for procuring hirelings; without considering the probability of losing the former by death, & c.

One more consideration I would call to your attention, which is when you have once established your manner of living, it will be difficult to retreat & fix upon another without new expences and confusion. If, therefore, after you have, by your skill and attention, and with great expence, possessed yourself of a number of slaves, you should be deprived of them, you will then, tho' too late see that your plan was erroneous: you will then see on what a precarious footing your most valuable property rested. Reflect therefore on the prospect of perpetual slavery. Is it not to be expected that slavery will, ere long, be abolished in our state, as it already has in several others? I presume it will. Justice & humanity urges its necessity, while example corroborates its certainty. We anticipate the time when justice shall prevail over tyranny, and liberty shall triumph among the Africans, as it once did among the Americans. I confess I see no way by which we can restore tranquility among them without difficulty or danger, or some disquietude among ourselves: but we must suppose these will be surmounted, and some plan fallen on to restore them their liberty.

Whether they will be incorporated among us; colonized on some of our vacant land; or transported to their native country, I cannot say; neither would be satisfactory to me, tho' I should prefer the latter.