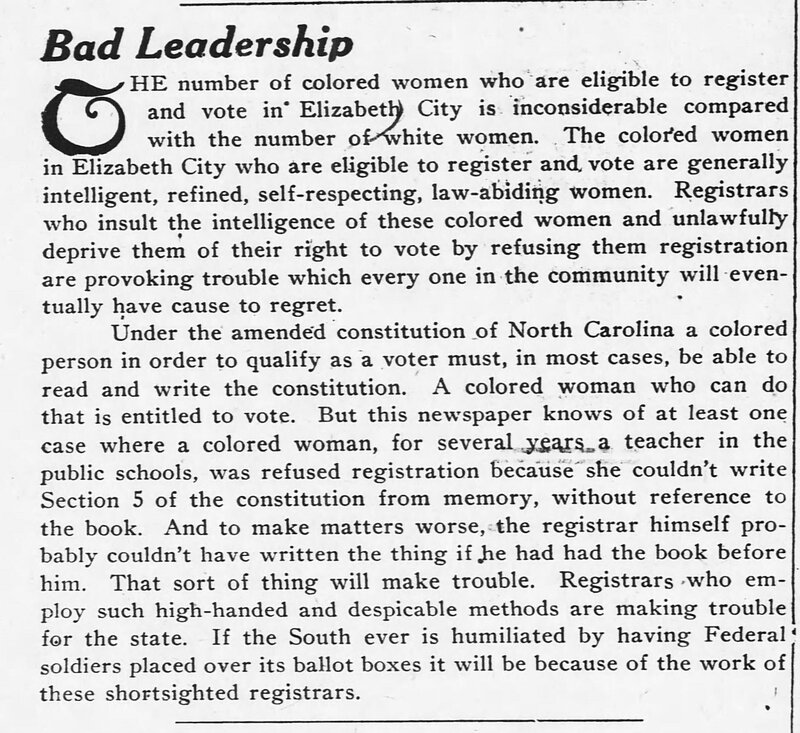 THE number of colored women who are eligible to register and vote in Elizabeth City is. inconsiderable compared with the number of white women. The colored women in Elizabeth City who are eligible to register and vote are generally intelligent, refined, self-respecting, law-abiding women. Registrars who insult the intelligence of these colored women and unlawfully deprive them of their right to vote by refusing them registration are provoking trouble which every one in ·the community will eventually have cause to regret.

Under the amended constitution of North Carolina a colored person in order to qualify as a voter must, in most cases, be able to read and write the constitution. A colored woman who can do that is entitled to vote. But this newspaper knows of at least one case where a colored woman, for several years a teacher in the public schools, was refused registration because she couldn't write Section 5 of the constitution from memory, without reference to the book. And to make matters worse, the registrar himself probably couldn't have written the thing if he had had the book before him. That sort of thing will make trouble. Registrars who employ such high-handed and despicable methods are making trouble for the state. If the South ever is humiliated by having Federal soldiers placed over its ballot boxes it will be because of the work of these shortsighted registrars.