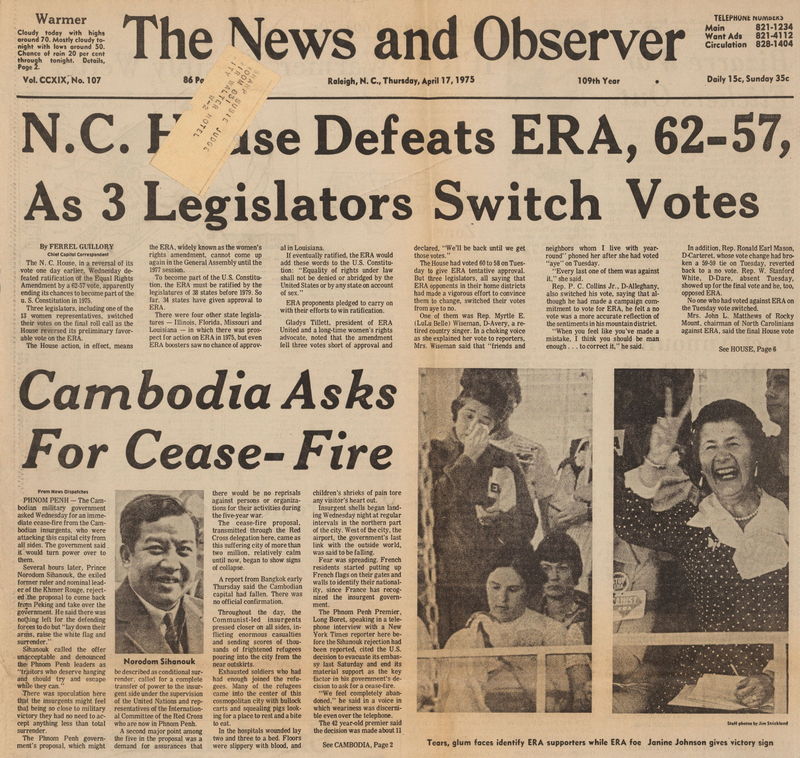 The N.C. House, in a reversal of its vote one day earlier, Wednesday defeated ratification of the Equal Rights Amendment by a 62-57 vote, apparently ending its chances to become part of the U.S. Constitution in 1975.

Three legislators, including one of the 13 women representatives, switched their votes on the final roll call as the House reversed its preliminary favorable vote on the ERA.

The House action, in effect, means the ERA, widely known as the women’s rights amendment, cannot come up again in the General Assembly until the 1977 session.

To become part of the U.S. Constitution, the ERA must be ratified by the legislatures of 38 states before 1979. So far, 34 states have given approval to ERA.

There were four other state legislatures - Illinois, Florida, Missouri and Louisiana - in which there was prospect for action on ERA in 1975, but even ERA boosters saw no chance of approval in Louisiana.

If eventually ratified, the ERA would add these words to the U.S. Constitution: “Equality of rights under law shall not be denied or abridged by the United States or by any state on account of sex.”

ERA proponents pledged to carry on with their efforts to win ratification.

Gladys Tillett, president of ERA United and a long-time women’s rights advocate, noted that the amendment fell three votes short of approval and declared “We’ll be back until we get those votes.”

The House had voted 60 to 58 on Tuesday to give ERA tentative approval. But three legislators, all saying that ERA opponents in their home districts had made a vigorous effort to convince them to change, switched their votes from aye to no.

On of them was Rep. Myrtle E. (Lulu Belle) Wiseman, D-Avery, a retired country singer. In a choking voice as she explained her vote to reporters, Mrs. Wiseman said that “friends and neighbors whom I live with year-round” phoned her after she had voted “aye” on Tuesday.

“Every last one of them was against it,” she said.

Rep. P. C. Collins Jr., D-Alleghany, also switched his vote, saying that although he had made a campaign commitment to vote for ERA, he felt a no vote was a more accurate reflection of the sentiments in his mountain district.

“When you feel like you’ve made a mistake, I think you should be man enough…to correct it,” he said.

In addition, Rep. Ronald Earl Mason, D-Carteret, whose vote change had broken a 59-59 tie on Tuesday, reverted back to a no vote. Rep. W. Stanford White, D-Dare, absent Tuesday, showed up for the final vote and he, too, opposed ERA.

No one who had voted against ERA on the Tuesday vote switched.