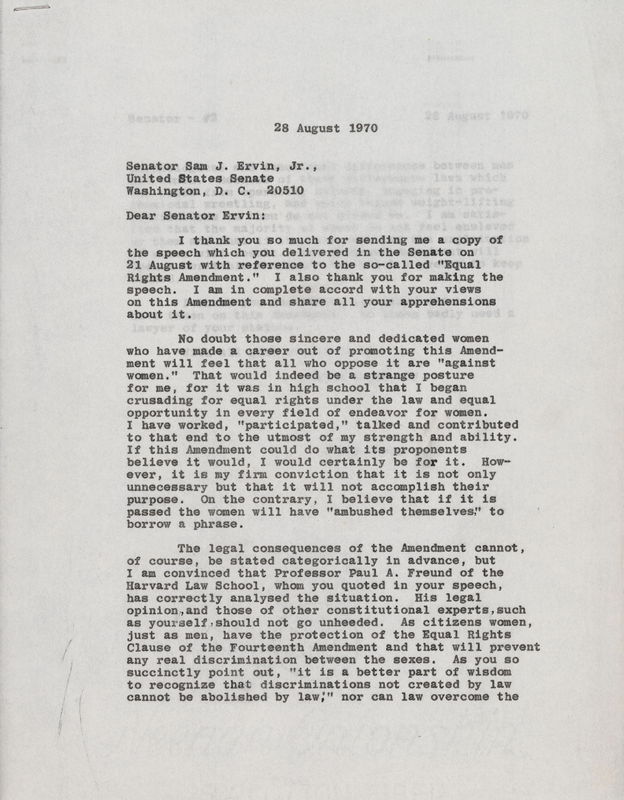 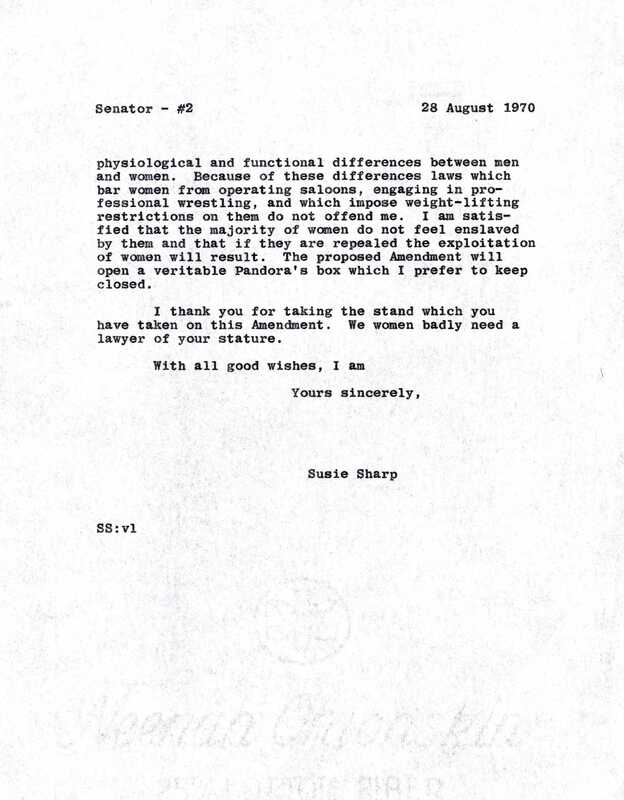 I thank you so much for sending me a copy of the speech which you delivered in the Senate on 21 August with reference to the so-called “Equal Rights Amendment.” I also thank you for making the speech. I am in complete accord with your views on this Amendment and share all your apprehensions about it.

No doubt those sincere and dedicated women who have made a career out of promoting this Amendment will feel that all who oppose it are “against women.” That would indeed be a strange posture for me, for it was in high school that I began crusading for equal rights under the law and equal opportunity in every field of endeavor for women. I have worked, “participated,” talked and contributed to that end to the utmost of my strength and ability. If this Amendment could do what its proponents believe it would, I would certainly be for it. However, it is my firm conviction that it is not only unnecessary but that it will not accomplish their purpose. On the contrary, I believe that if it is passed the women will have “ambushed themselves,” to borrow a phrase.

The legal consequences of the Amendment cannot, of course, be stated categorically in advance, but I am convinced that Professor Paul A. Freund of the Harvard Law School, whom you quoted in your speech, has correctly analyzed the situation. His legal opinion, and those of other constitutional experts, such as yourself, should not go unheeded. As citizens women, just as men, have the protection of the Equal Rights Clause of the Fourteenth Amendment and that will prevent any real discrimination between the sexes. As you so succinctly point out, “it is a better part of wisdom to recognize that discriminations not created by law cannot be abolished by law,” nor can law overcome the…

physiological and functional differences between men and women. Because of these differences laws which bar women from operating saloons, engaging in professional wrestling, and which impose weight-lifting restrictions on them do not offend me. I am satisfied that the majority of women do not feel enslaved by them and that if they are repealed the exploitation of women will result. The proposed Amendment will open a veritable Pandora's box which I prefer to keep closed.

I thank you for taking the stand which you have taken on this Amendment. We women badly need a lawyer of your stature.