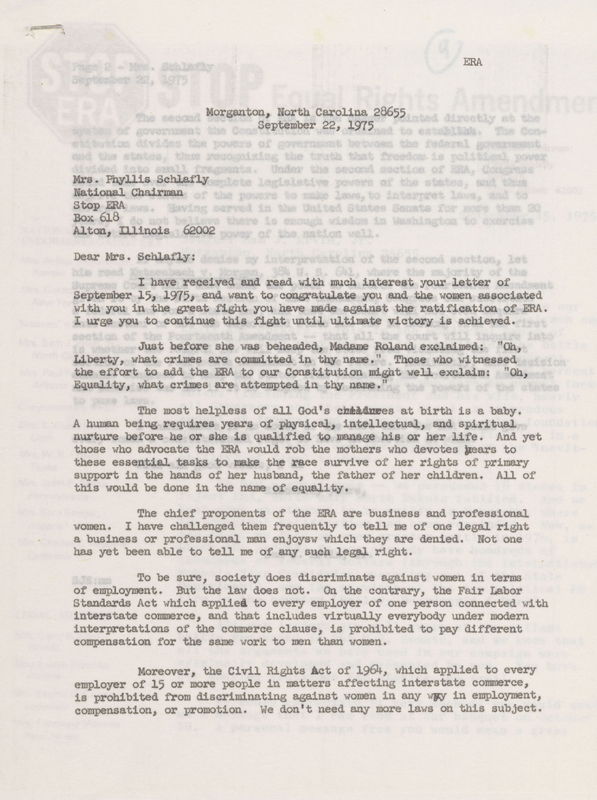 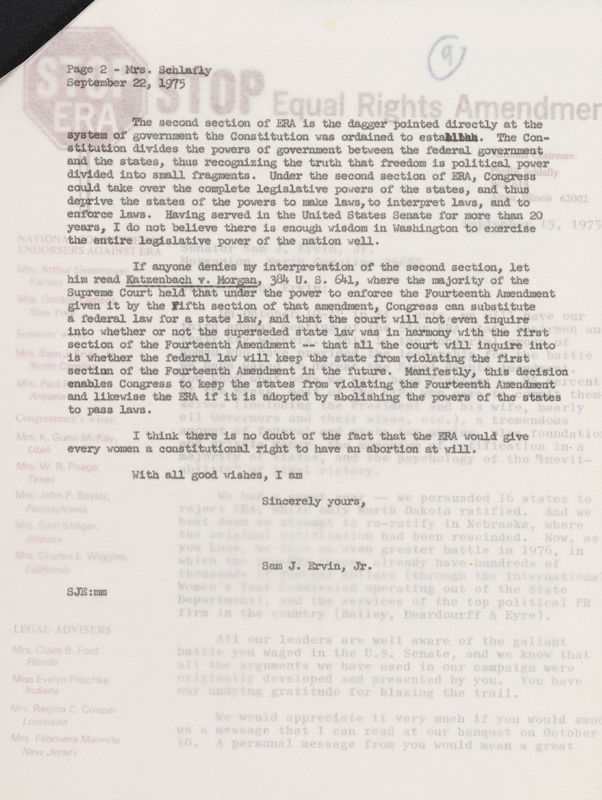 I have received and read with much interest your letter of September 15, 1975, and want to congratulate you and the women associated with you in the great fight you have made against the ratification of ERA. I urge you to continue this fight until ultimate victory is achieved.

The most helpless of all God’s creatures at birth is a baby. A human being requires years of physical, intellectual, and spiritual nurture before he or she is qualified to manage his or her life. And yet those who advocate the ERA would rob the mothers who devotes years to these essential tasks to make the race survive of her rights of primary support in the hands of her husband, the father of her children. All of this would be done in the name of equality.

To be sure, society does discriminate against women in terms of employment. But the law does not. On the contrary, the Fair Labor Standards Act which applied to every employer of one person connected with interstate commerce, and that included virtually everybody under modern interpretations of the commerce clause, is prohibited to pay different compensation for the same work to men than women.

Moreover, the Civil Rights Act of 1964, which applied to every employer of 15 or more people in matters affecting interstate commerce, is prohibited from discriminating against women in any way in employment, compensation, or promotion. We don’t need any more laws on this subject.

The second section of ERA is the dagger pointed directly at the system of government the Constitution was ordained to establish. The Constitution divides the powers of government between the federal government and the states, thus recognizing the truth that freedom is political power divided into small fragments. Under the second section of ERA, Congress could take over the complete legislative powers of the states, and thus deprive the states of the powers to make laws, to interpret laws, and to enforce laws. Having served in the United States Senate for more than 20 years, I do not believed there is enough wisdom in Washington to exercise the entire legislative power of the nation well.

I think there is no doubt of the fact that the ERA would give every women a constitutional right to have an abortion at will.