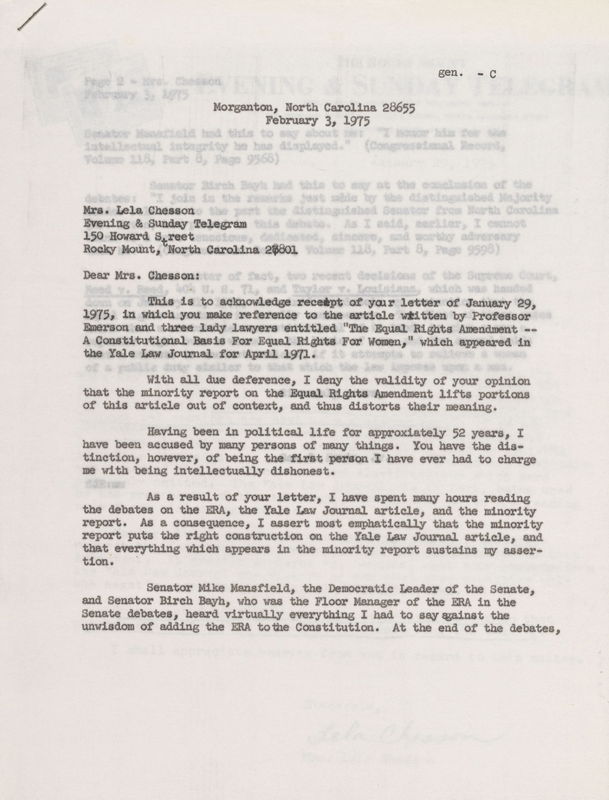 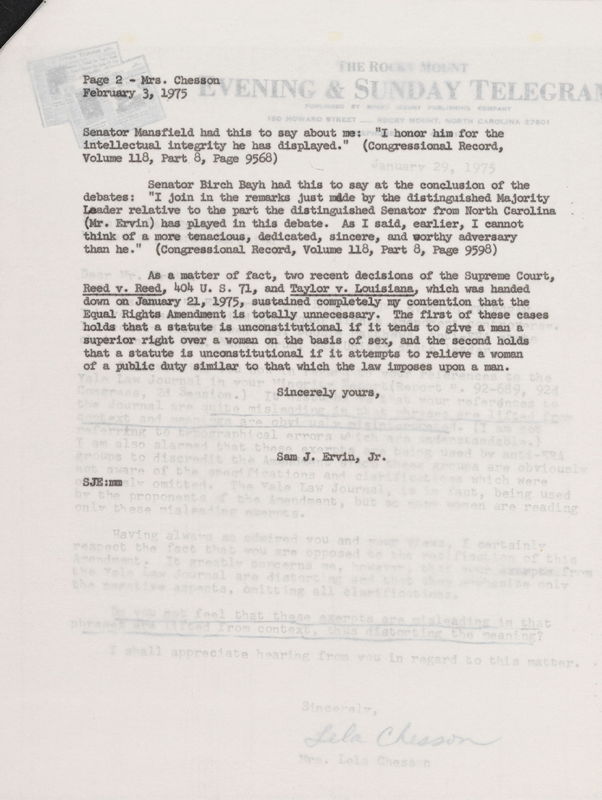 This is to acknowledge receipt of your letter of January 29, 1975, in which you make reference to the article written by Professor Emerson and three lady lawyers entitle “The Equal Rights Amendment — A Constitutional Basis For Equal Rights For Women,” which appeared in Yale Law Journal for April 1971.

With all due deference, I deny the validity of your opinion that the minority report on the Equal Rights Amendment lifts portions of this article out of context, and thus distorts their meaning.

Having been in political life for approximately 52 years, I have accused by many persons of many things. You have the distinction, however, of being the first person I have ever had to discard me with being intellectually dishonest.

Senator Mike Mansfield, the Democratic Leader of the Senate, and Senator Birch Bayh, who was the Floor Manager of the ERA in the Senate debates, heard virtually everything I had to say against the unwisdom of adding the ERA to the Constitution. At the end of the debates, …

Senator Mansfield had this to say about me: “I honor him for the intellectual integrity he has displayed.” (Congressional Record, Volume 118, Part 8, Page 9568)

Senator Birch Bayh had this to say at the conclusion of the debates: “I join in the remarks just made by the distinguished Majority Leader relative to the part the distinguished Senator from North Carolina (Mr. Ervin) has played in this debate. As I said, earlier, I cannot think of a more tenacious, dedicated, sincere, and worthy adversary than he.” (Congressional Record, Volume 118, Part 8, Page 9598)

As a matter of fact, two recent decisions of the Supreme Court, Reed v. Reed, 404 U.S. 71, and Taylor v. Louisiana, which was handed down on January 21, 1975, sustained completely my contention that the Equal Rights Amendment is totally unnecessary. The first of these cases holds that a statute is unconstitutional if it tends to give a man superior right over a woman on the basis of sex, and the second holds that a statute is unconstitutional if it attempts to relieve a woman of a public duty similar to that which the law imposes upon a man.