How did the Public Respond?

Community members had wide-ranging opinions about the takeover. Individuals of all races utilized The Carolina Indian Voice, a Lumbee-owned paper, and The Robesonian to say that it was justified and necessary to call attention to the alleged crimes in the sheriff's department. However, other community members argued that the hostage taking was dangerous and unwarranted, and it did nothing to advance the social justice agenda in Robeson County. Even today, there are people of all races in Robeson County who view Eddie Hatcher as a flawed hero and others who think that the takeover was a mistake. 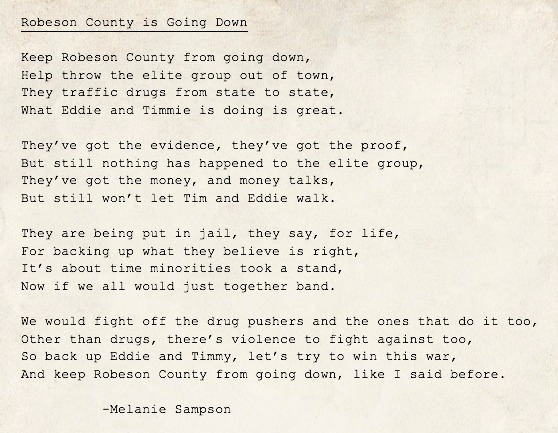 This poem by Melanie Sampson provides a unique perspective of the hostage takeover and the broader social and political context within the community from a Robeson County Indian. Sampson expresses support for Hatcher and Jacobs and interprets their actions as a response to racial injustice on the part of local elites. She also calls for solidarity on the part of Robeson County's minority groups to oppose corruption and end the ongoing drug war. 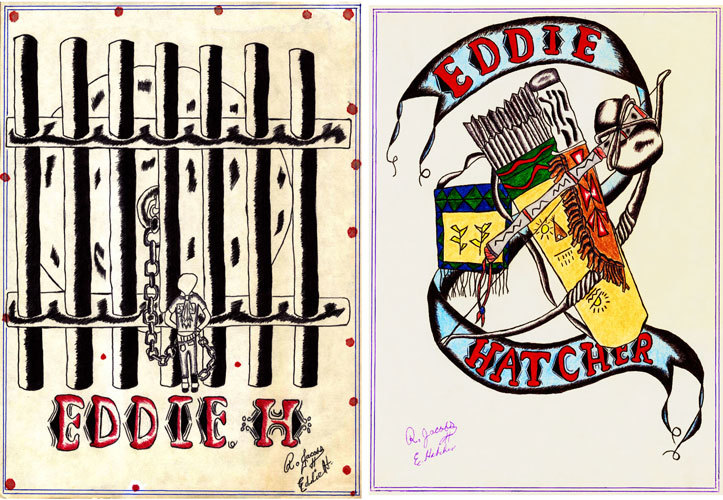 These illustrations, presumably created by Timothy Jacobs ("R. Jacobs") and Eddie Hatcher ("Eddie H.") show both their pride for their Indian heritage and their contempt for the local government. In the late 1980s, Robeson County Indians were being imprisoned at extremely high rates as part of the ongoing drug wars. This pattern of legal discrimination likely left Hatcher and Jacobs feeling helpless in the wake of the hostage takeover and questioning whether they would receive a fair trial at the hands of government officials. 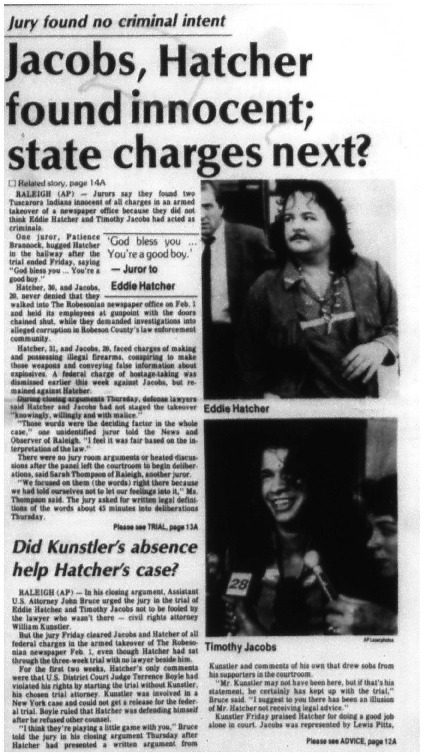 This issue of The Robesonian, published October 16, 1988, clarifies the initial outcome of Eddie Hatcher and Timothy Jacobs' federal trial. The jury declared the two Tuscarora Indians innocent off all charges, believing that Hatcher and Jacobs had acted without criminal intent. Later that year, however, the state of North Carolina indicted Hatcher under the 1984 Anti-Terrorist Act, the first individual to be so charged. Hatcher was found guilty and sentenced to long-term incarceration in a state penitentiary.

This striking set of quotations was compiled by staff of The Robesonian in the immediate aftermath of the hostage takeover and displays community members' diverse interpretations of the event. Several responses reference the ongoing social unrest as justification for the actions of Hatcher and Jacobs, but other county residents criticized the takeover as dangerous and unnecessary.