What was the Takeover?

In an attempt to protect himself from retribution by the police, Eddie Hatcher decided to take over The Robesonian by force with help from Timothy Jacobs. Partially done to save himself, Hatcher's act promoted personal and communal sovereignty by forcing a parley with the government. The ten hour standoff concluded peacefully, ending with the arrest of Hatcher and Jacobs after Gov. Martin responded to Hatcher’s list of demands. 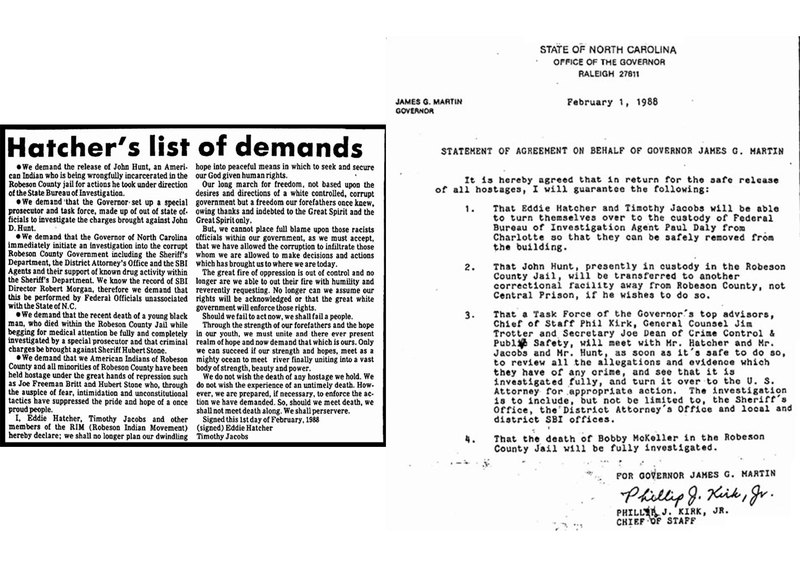 “Hatcher’s List of Demands” and “Statement of Agreement on Behalf of Governor James G. Martin,” February 2, 1988

Days prior to his takeover of The Robesonian, Eddie Hatcher contacted James G. Martin, the governor of North Carolina, about the corruption of local officials and the drug trade within Robeson County. Martin initially refused to meet with Hatcher. Yet after the hostage takeover, the governor was much more responsive to Hatcher's demands and promised that the state government would investigate local corruption within the rural community. This list does not cover all of Hatcher's motives, but it is essential for a complete understanding of the hostage takeover. 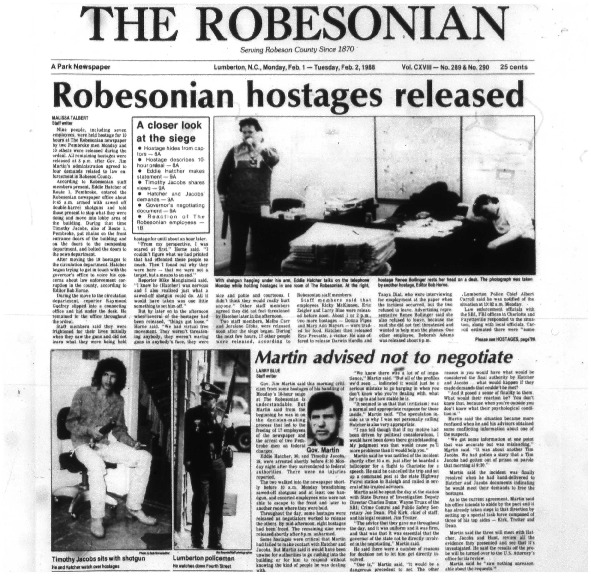 The Robesonian published this issue the day after the hostage takeover. In one article, editor Bob Horne and staff reporter Mike Mangiameli explain their perspectives on being taken hostage by Hatcher and Jacobs. Though they were held hostage for a full ten hours, neither admit to being afraid as the takeover progressed. The second article on the page outlines why Governor Jim Martin chose not to negotiate directly with Hatcher and Jacobs during their occupation of the newspaper office.

In this interview conducted in 2012, Timothy Jacobs discusses with Lorraine Ahearn the events of the takeover and his interaction with the hostages over the course of the ten-hour occupation of the newspaper office. 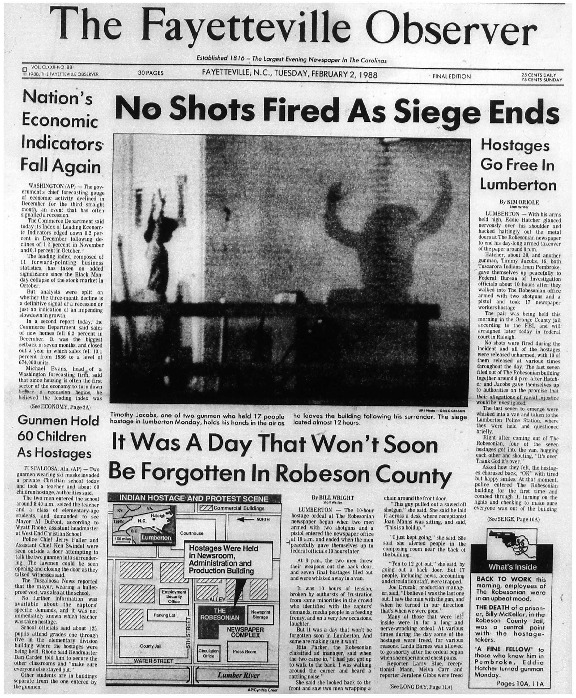 This is the front page of The Fayetteville Observer from February 2, 1988, the day after the hostage crisis. Coverage of Robeson County events fill the majority of the page, but it also contains significant articles about the nation's economic woes and another hostage situation in Alabama. The inequitable effects of economic recession on people of color were a key motivation for Hatcher and Jacobs, and hostage taking as a political protest was not uncommon at the time.