Chang and Eng* were born May 11, 1811 on a houseboat in the Meklong River in Siam's Samut Sungkhram Province. A four-inch band connected the twins at the chest, but each had his own internal organs and limbs. As conjoined twins, the brothers were considered curiosities, and were often described as monstrosities. After losing their father and many siblings during a cholera epidemic in 1819, Chang and Eng helped to support the remainder of the family by fishing and selling duck eggs.

The teenage twins left Siam in 1829 and began touring the United States and Europe as an exhibit. For fourteen years the twins appeared at hotels, lecture halls, museums, and fairs, speaking to crowds and demonstrating their physical dexterity. The "Siamese Twins" proved popular at a time when people looked upon the display of exotic or irregular bodies as entertainment.

*While living and working in the United States the brothers most often referred to themselves in publicity as "Chang and Eng" or "Chang-Eng," with Chang's name usually listed first. In Thailand, the brothers are called "In and Chan," which means two kinds of fruit of the same tree. "In" refers to a round big fruit with seed and "Chan" refers to a smaller fruit without seed. Both fruits are green in color when unripe and yellow when ripe. 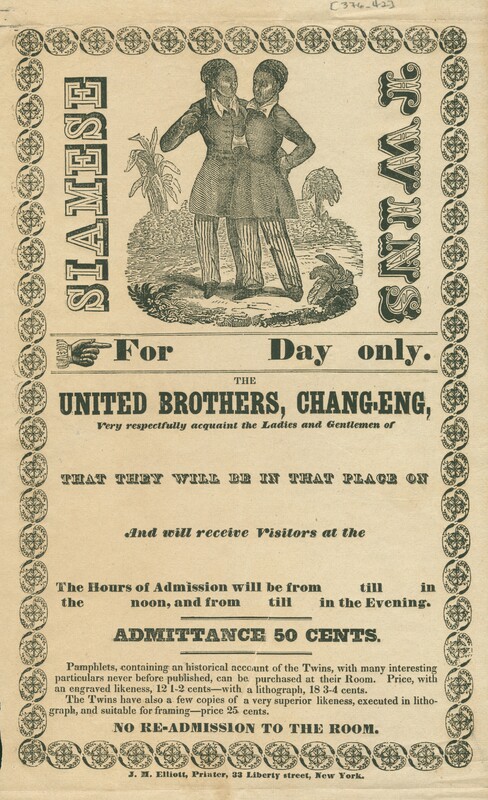 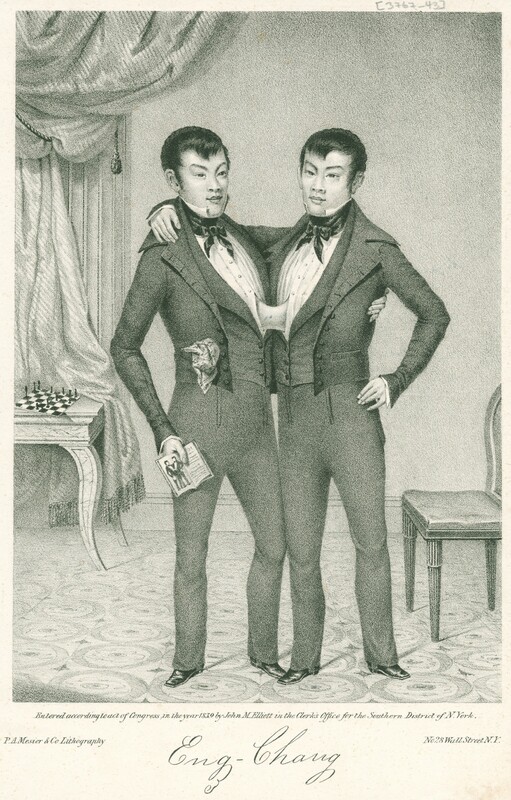 These items show an evolution of marketing materials used to promote the Siamese Twins' public appearances. In early years of their careers, they are portrayed in Asian dress and backdrop to emphasize their East Asian heritage. These 1830 broadsides were filled in specifically for each appearance.

The lithograph, an item that could be purchased as a souvenir, shows the twins dressed in fashionable western-style clothes. A chess board in the background refers to the twins’ expertise in the game.

The advertisement at bottom depicts the men with two of their sons.  At this venue, the Siamese Twins appeared on the same stage as the "Wild Australian Children" and the Carolina Twins, Millie-Christine, African American conjoined sisters who were also from North Carolina. 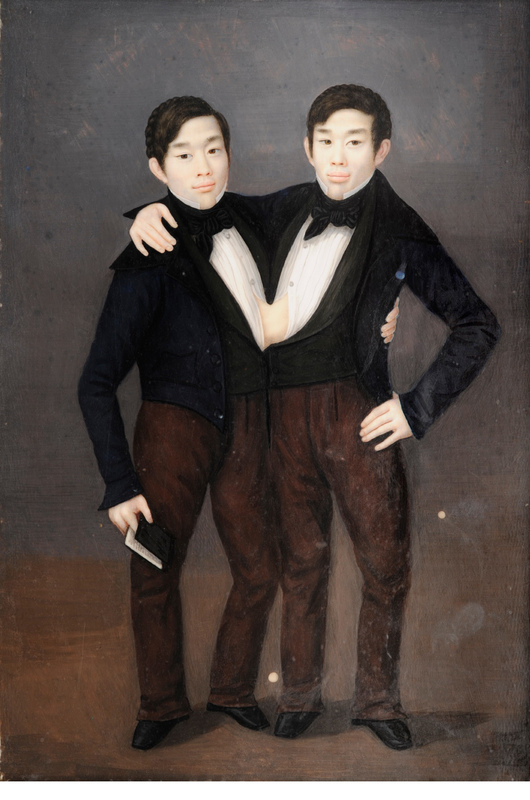 The twins had this portrait of watercolor and gum arabic on ivory made while touring in Paris, France. Although the twins are wearing western-style clothes and hair, this portrait shows that they retained a symbol of their Chinese heritage by continuing to wear long braids, known as queues, wrapped around their heads. 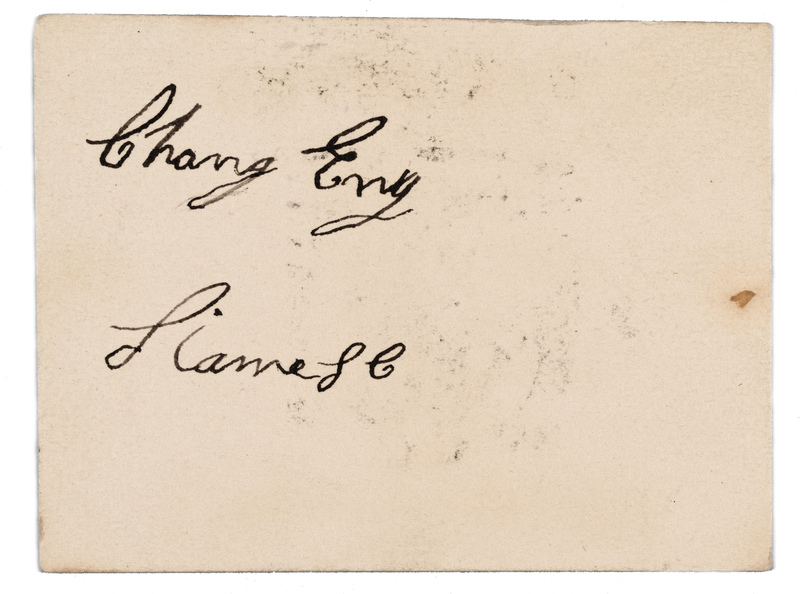 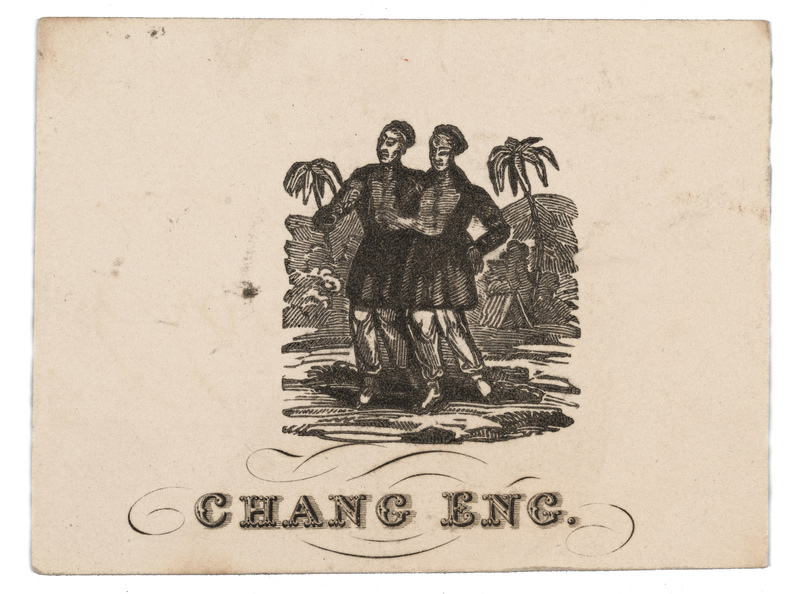 Calling cards were exchanged in the 1800s to indicate a wish to call on someone or the willingness to receive a particular visitor. Participation in this social ritual indicated gentility. As aspiring gentlemen, Chang and Eng would have kept a ready supply of these cards on hand. 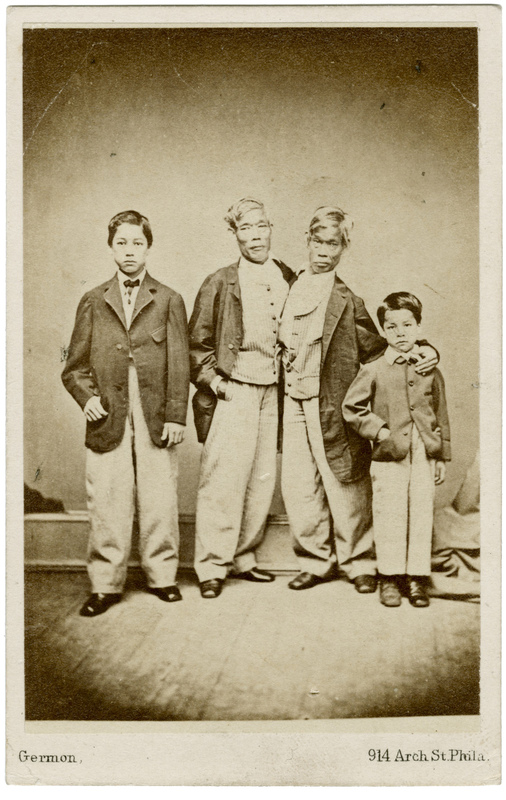 Like many other southerners after the Civil War, Chang and Eng lost money and property.  They returned to touring to support and educate their large families, often appearing on the stage with some of their children.  The story of their marriages and fatherhood reenergized public interest in them.

Chang’s son, Albert, attended the University of North Carolina at Chapel Hill.  It is likely that he was the first Asian American student to attend the University. 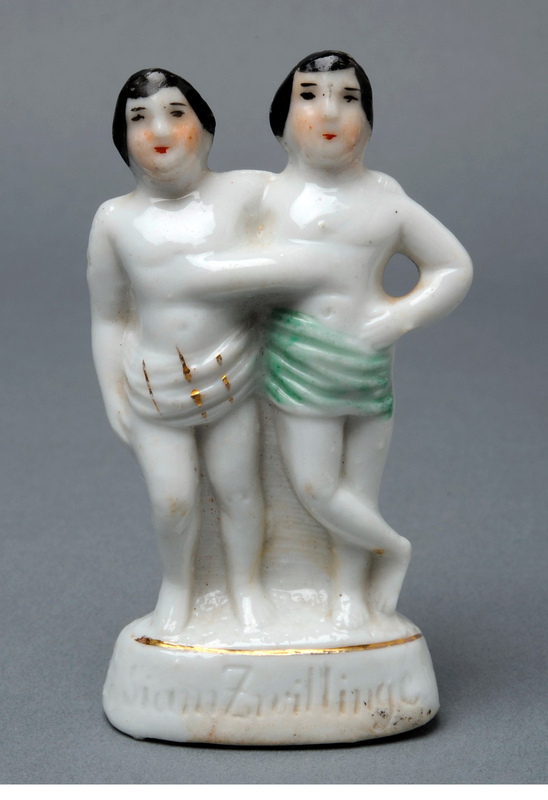 Tickets to see the "Siamese Twins" sold for about fifty cents. For another few cents, audience members could purchase a souvenir booklet about the brothers or a figurine depicting them. This figurine was sold during the twins' tour of Germany in 1870. 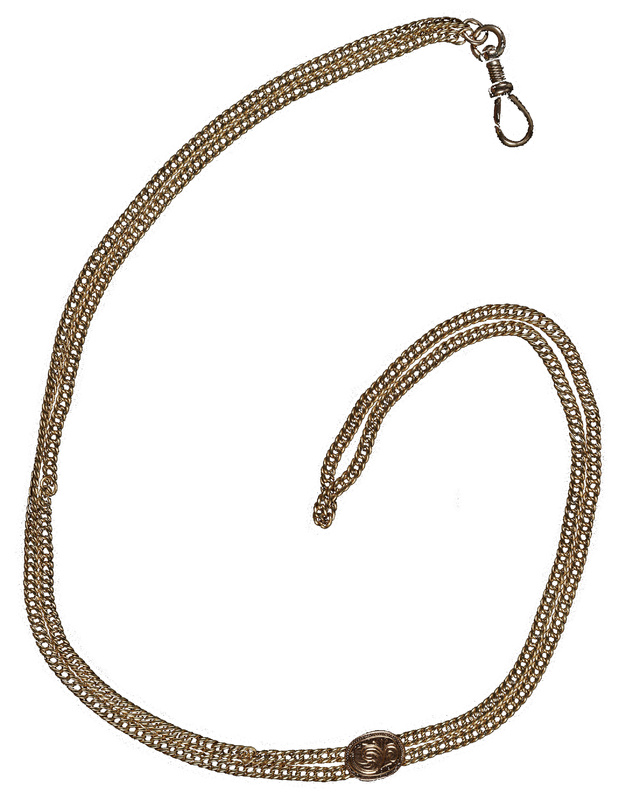 One of the twins would have attached this chain to a pocket watch and passed it through a buttonhole on a vest to prevent loss or theft of the watch.